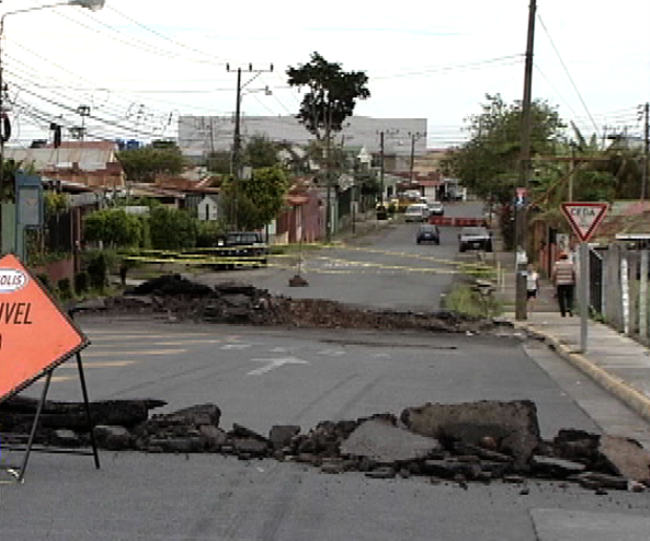 Repairing damage to a road caused by the rains last Friday is proving more difficult than you can imagine.

The constant rain that fell last Friday led to the lifting of the asphalt at the intersection of San Blas de Moravia, forcing the CONAVI to close off about 250 metres of road.

CONAVI officials were stumped, for it had not rained enough to cause this kind of damage. After inspection, an area resident had apparently taken the decision to plug up a sewer manhole with concrete, causing flooding and water to stagnate, resulting in the damage to the road surface.

Road laws prohibit the plugging up of sewer manholes and normally this would not be much of a problem, send a crew, break the concrete, restore the hole.

But…in this case, and with no explanation given, the sewer manhole is on private property. And for the CONAVI, to affect the repairs they need the property owner’s consent or obtain a court order. The latter seems to be the case as the property owner is not co-operating.

Meanwhile, the main concern of area residents is when will the road be re-opened and what other problems can they expect.

The road is a major route moving traffic between San Rafael de Moravia and Coronado, in San José’s east end.