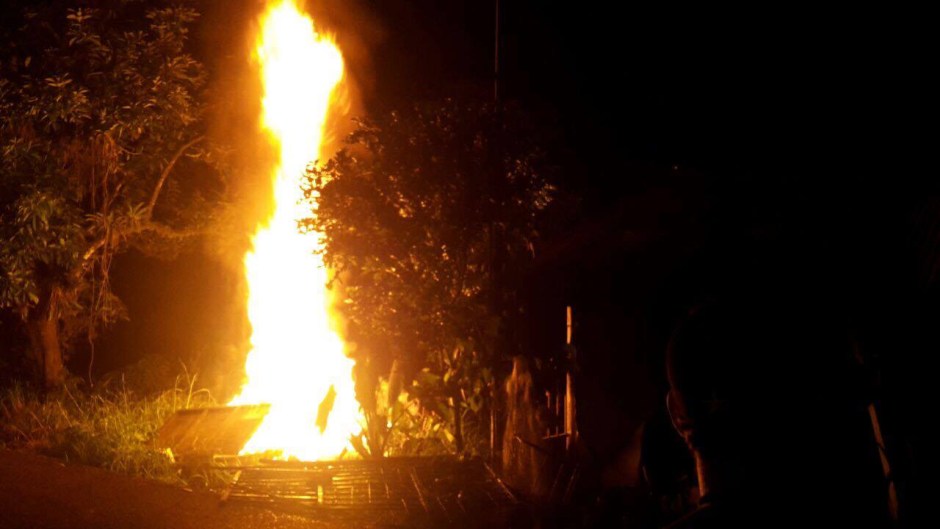 (QCOSTARICA) A group of really pissed of neighbours on Sunday destroyed and then set on fire the remains of the house where the alleged killer of an 8-year-old boy lived.

Some 150 residents of El Edén, in Guácimo in the province of Limón, near Guapiles, moved in on the house minutes after crime scene investigators of the Organismo de Investigación Judicial (OIJ) completed processing the residence.

At first it was just a few angry neighbours taking out their frustrations on the belongings of 23 year-old Jordi Campos Mendoza, arrested Sunday morning for the alleged decapitation and genital mutilation of 8 year-old Kendall Martínez.

As the minutes passed, the crowd got larger and larger.

On Saturday, the body, without a head, of the young Martinez was found at the edge of the river some 300 metres from the Campos house. The head was found another 300 metres away. A neighbour made the gruesome discovery around 10:40pm.

Area residents described Campos as a “dogradicto” (drug addict), thief and known for molesting young girls and boys in the area since he moved in some weeks ago.

The alleged killed was known to the family of the little boy, helping the family plant beans on the small lot only a block away.

According to reports, Campos lured the little boy to his home, while the parents believed he was playing at the house of another neighbour.

But the hours passed and the little boy had not come home, his parents became worried.

It was 4:0opm when both parents went out looking for Kendall.

He was not at the house where he said he would be.

It was by now 6:30pm when one of the neighbours suggested they look for him at the Campos house, where they had seen him go in.

When no one answered the door, the father kicks it in.

Searching through the house he found blood and clothing. Police were called in and with the help of  residents, they began the search for Kendall.

Sunday night. The 9-1-1 call came in at 7:40pm Sunday, the Fuerza Publica (police) reporting that a group of residents had blocked street access to impede police and fire trucks from reaching the house.

Leonel Jiménez Ramírez, chief of communications at the Bomberos (fire department), reported that the house was completely engulfed in flames by the time firefighters could reach it.

No arrests were reported.

- Advertisement -
Paying the bills
Previous articleMexican Legend Juan Gabriel Dead at 66
Next articleLess Rain Than Expected This Season, But Be Prepared!

The man found this morning on the side of the road...
Read more