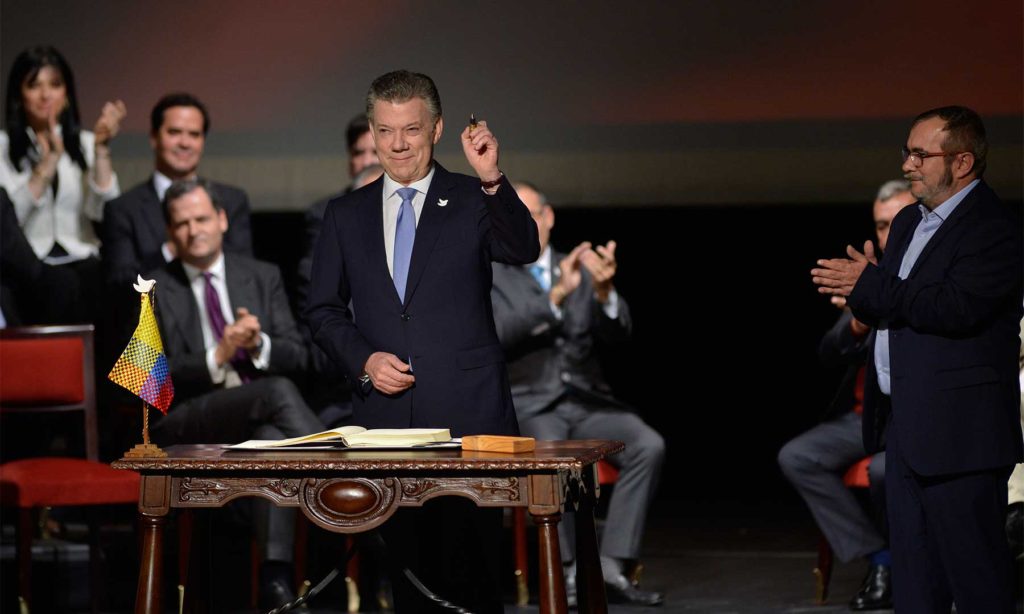 TODAY COLOMBIA NEWS – Insightcrime.org – Colombia’s government and rebel group the FARC have signed a revised peace deal, as the two sides race to reduce the chances of more guerrilla fighters falling outside of the planned demobilization process.

President Juan Manuel Santos and commander-in-chief of the Revolutionary Armed Forces of Colombia (Fuerzas Armadas Revolucionarias de Colombia – FARC), Rodrigo Londoño Echeverry, alias “Timochenko,” signed a new peace deal on the morning of November 24 in the Colombian capital of Bogotá. The signing comes seven weeks after voters rejected an initial agreement between the two sides. Congress will reportedly hold a vote for its approval this coming Tuesday.

If the agreement is approved, the legislative body will have to pass numerous laws attached to the deal before it can be implemented. It remains to be seen if this will be done via a “fast-track” process by which the laws would be passed by a simple yes/no vote on each of its provisions. The other option would to open up the provisions for debate, which could take several months.

The two sides received hundreds of proposals to modify the deal from the political opposition. The main sticking points were that FARC members would face alternatives to prison time, and that the former guerrillas would be guaranteed 10 seats in congress for two terms. Another delicate issue is that under the initial deal, drug trafficking was considered a political crime that could be pardoned.

But the new agreement has not made many substantial changes in these areas, and the amendments are considered insufficient by the political opposition spearheaded by former President Álvaro Uribe and his Democratic Center party.

The Colombian government and FARC leadership are keenly aware that they are in a race against the clock. FARC fighters who had already begun preparations to demobilize have been stuck in a precarious limbo ever since the initial peace deal was voted down in early October. This sense of urgency is reflected in the quick turnaround between the rejection of the first agreement and the signing of the second.

“We have to act,” Santos said during the signing ceremony. “We have no time to lose.”

As more time passes, it becomes increasingly likely that FARC elements abandon the peace process altogether and return to the financial security of their criminal activities, most notably the overseeing of cocaine production and extortion. Dissidents from the FARC’s 1st Front, which has deep links to the illicit drug trade, have already announced their intention to not demobilize.

Colombian security forces recently told InSight Crime that the rate of dissidence within FARC ranks could be as high as 49 percent. To compare, past demobilization processes with the Popular Liberation Army (Ejército Popular de Liberación – EPL) rebels and the United Self-Defense Forces of Colombia (Autodefensas Unidas de Colombia – AUC) saw a non-adherence rate of around 20 percent. In both cases, splinter groups consolidated into powerful criminal factions that remain heavily involved in the drug trade, providing a worrying precedent that could be surpassed in the case of the FARC.

On Friday, 7th October 2016, we learned that after thirty-four years,...
Read more