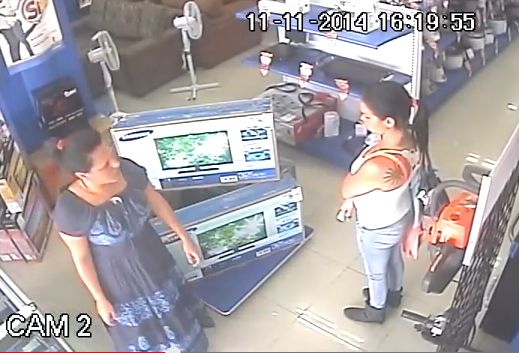 QCOSTARICA – The woman “roba teles” (steals screens), the subject of a search by OIJ agents, is also the focus of comments on how she is able to place a boxed television screen between her legs and then walk around normally.

In the new video from a store in Saripiquí, we see the woman once again do her thing.  Click here to see the first video.

In this video released by the OIJ, we get a better angle of how she turns the box upright, places it between her legs and then walks around without any difficulty. An accomplice (which has been since apprehended by authorities) helps her to ensure the box is not visible.

From the clothing, the two women struck on at least two occasions on the same day.

According to the OIJ, the woman has since was captured on video in other stores. However, the pair used the “distraction” method for stealing merchandise from unattended counters.

The videos led police to capture the accomplice, but the ‘main’ character remains at large, foiling police on at least two occasions as they got close capturing her.

Authorities are asking the public for any information to call 800 8000 645  or send an email to cicooij@poder-judicial.go.cr

- Advertisement -
Paying the bills
Previous articleWill Another Latina Take The Crown?
Next articleBagelmen’s Closes Its Doors, Leaving Dozens Out Of Work