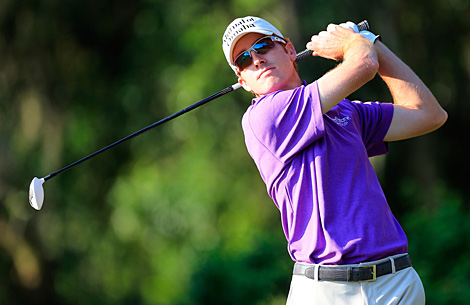 American professional golfer, Roberto Castro, whose father is Costa Rican, chipped in from 80 feet for par at the 18th hole to remain in a four-way tie for the lead after the third round of the $AU7 million US PGA National.

Castro, whose best PGA finish is a share of seventh at the 2012 Greenbrier Classic, found the water with his approach on the final hole at Congressional Country Club but plopped the ball over a ridge and curled it into the cup.

“Saving a bogey would have been huge. Making a par is just a bonus,” Castro said. “I thought I could just tumble it over the top of the ridge there. I told myself to be aggressive and get it back in there and it came out perfect.”

The dramatic shot ended a par-71 round and kept Castro level with countrymen James Driscoll and Bill Haas and Argentina’s Andres Romero on seven-under par 206 after 54 holes on a wild day that saw leader after leader falter.

Four players are the most to share a 54-hole US PGA lead this year.

Masters champion Adam Scott was the best-placed Australian. He fired three birdies on his way to a two-under 69 round to rocket 23 places up the leaderboard into a tie for 27th place on 213.

Fellow Australian Jason Day (71) was a further shot back, eight strokes off the pace on 214.