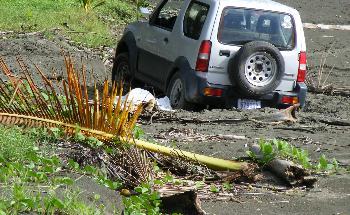 Although statistics from the Ministry of Public Safety (initials MSP in Spanish) indicate that overall crime is down in Costa Rica, many rural and farming communities are seeing criminal elements getting comfortable in their quiet towns.

This is particularly true in the province of Alajuela, where the northern cantons of San Carlos and Los Chiles join the municipality of Ciudad Quesada in their woes concerning the growing criminality.

Three recent reports by Radio Santa Clara underscore the sad situation currently experienced by these once idyllic towns, which are very important to the agricultural economy of Costa Rica:

The wife and daughter of the director of the Municipality of San Carlos were held up by four masked and armed men this past week. The home invasion occurred around 7:00 p.m., when the spouse of Carlos Villalobos Vargas was making coffee and her 12-year old daughter was sitting in front of a computer. Two men overpowered the woman and her daughter, tying up their wrists and ankles while two others searched the property.

The ordeal lasted 12 minutes, and the men took about $400 in coins from piggy banks and two cell phones. They fled in a motor vehicle.

This northern canton, which is home to pristine nature preserves and farmlands, has seen its share of recent break-ins. At the El Parque community school, unknown perpetrators stole all the food from the cafeteria, a loss of about $1,000. Near the Hernandez River, burglars were surprised by passerby and fled a home, leaving behind a large knife. In the community of Pavon, robbers relieved a family from their cash and jewelry. All these incidents took place last week, and in some cases the victims did not contact law enforcement because they don’t think anything can be done to prevent criminality in Costa Rica.

Law enforcement investigators believe that at least two criminal crews are operating in and around Ciudad Quesada. These groups began their nefarious activities back in June with a string of small-time thefts, but by August they became emboldened.

At the Kolbi Wireless store located in front of the San Carlos hospital, robbers recently walked away with 35 mobile phones and cash. A week later, a computer store was relieved of its inventory -a loss of about $22,000. In addition to these major crimes, many high school students have been targeted by thieves for their cell phones. Pickpockets and other flagrant street criminals are increasingly on the prowl, and residents are complaining that a greater police presence and foot patrols are desperately needed.