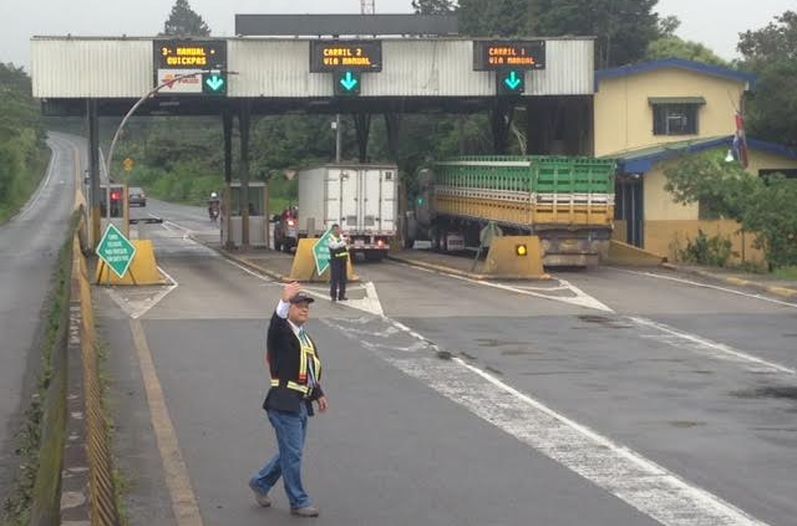 (QCOSTARICA) The Ministerio de Obras Publicas y Transportes (MOPT), through its division the Consejo Nacional de Vialidad (Conavi), can surprise us at times, with the re-opening of the Ruta 32 this morning.

The 32 had been closed since Monday when first the supports of the bridge over the Rio Blanco (kilometre 58) were damaged by a strong river waters and later that same day, a landslide at kilometre 19 (some 800 metres from the Zurqui tunnel) dumped more than 7.500 metric tons of mud and debris on the roadway.

By Tuesday night passage over the Rio Blanco river bridge was re-opened, but, the Ruta remained closed as work crews worked around the clock.

Related: Ruta 32 To Remain Closed Into The Weekend

At 7:45am this Friday morning, Mario Calderón, director of the Policía de Tránsito (traffic police), announced the opening of the Ruta 32 after officials decided the road was safe to transit.

“We are continuing patrols and surveillance. At kilometre 19 we have two of the three lanes opened, one in each direction,” said Calderon.

The re-opening had been announced last night to take place at 7:00am. Hundreds of trucks, on both sides of the closure, had lined up to get through. However, a small landslide at kilometre 21, caused the 45 minute delay.

Heavy rains of the season are the cause of the landslides through this area of the Braulio Carrillo National Park.

Meanwhile, the National Emergency Commission (CNE) is continuing its Yellow alert for the Caribbean and Northern Zone that have been affected by floods and the collapse of many roads and bridges since last Sunday.

If you are heading out to Limon from San Jose (or the other way around), it is best to consult the Policia de Transito “estado de rutas” (road conditions) (click here) for any possible problems and/or road closures. At the Q we will do our best to keep the public informed of any major problems.

QCOSTARICA (Nacion.com) Four out of ten complaints of extortion...
Redaqted