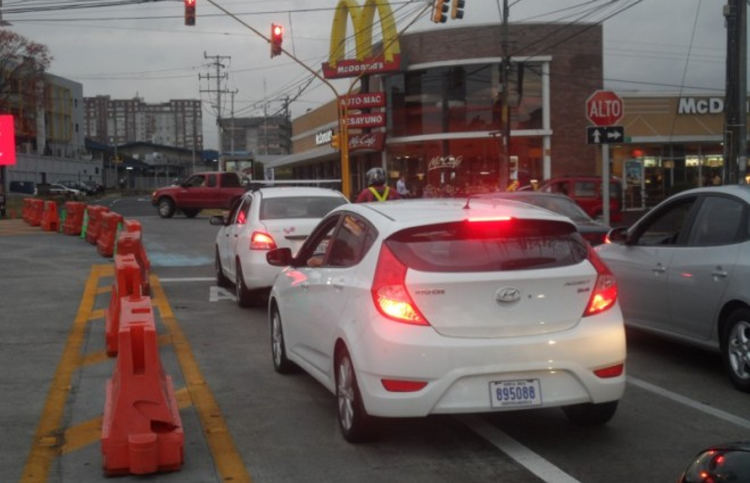 QCOSTARICA – To avoid collisions between the urban train and vehicles in the area of Sabana Sur, in front of the Gimnasio Nacional, barriers were erected two years ago, stopping Sabana Sur eastbound traffic from making a left turn at the McDonalds.

The barriers also chocked off all north/south traffic through the intersection.

In a few months, however,  the traffic engineering department of the Ministry of Transport (Dirección de General de Ingeniería de Tránsito – DGIT, in Spanish) working with a private contractor, will be installing train level crossings, to once again allow the flow of vehicular traffic.

The head of traffic lights at the DGIT, José Roldán, explained that level crossings will be connected to the traffic lights, as sensors detecting the oncoming train will trigger a change of light, stopping vehicles from crossing the path of the train.

The level crossings replace the current use of plastic barriers set by the traffic police.

The Sabana level crossing is one of some 43 that will be installed along the Pavas-San José-Curridat and San José-Heredia train routes.

Roldán explained the materials are being imported from Germany and Mexico, with an expected arrival after Easter.

QCOSTARICA - A sad discovery occurred this Thursday morning in a hotel located in La Sabana, in San José, the lifeless body of a...
Cine (Movies)

QCOSTARICA - The judicial file of the Cochinilla Case, on alleged corruption in road works, exposes how three companies would have covered up the...
Rico's Digest