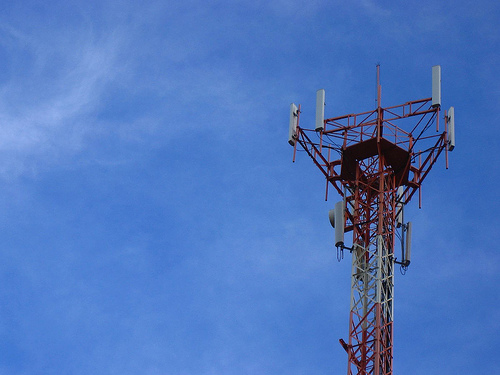 Politician Antonio Alvarez (Desanti), the perennial would-be presidential candidate, won his case before the Constitutional Chamber of the Supreme Court (Sala IV) which last week ordered removal of a cell phone post in front of his house.

Of the 30 suits filed before Sala IV to have cell phone towers removed on the grounds of environmental damage, the Alvarez suit is the only one granted. There are six similar suits still under study.

The offending post was installed barely three months ago on the sidewalk in front of Alvarez’s home in Curridabat. The town’s mayor, Edgar Mora, expressed surprise at the court’s ruling, calling it “very strange.”

Mora added that it would be ridiculous if, after having rejected so many complaints, Sala IV would rule that an environmental impact study would have to be made for every cell phone post installed.

Among many residents, the proliferation of cell phone transmitting installations has been viewed with suspicion but test cases have been cleared by the environmental agency SETENA.

The installations, ruled SETENA, do not emit rays dangerous to nearby residents or wildlife. Moreover, the installations have negligible impact on nature.

On the other hand, Alvarez said he was surprised that SETENA did not do a study. “This is altogether too obvious,” he said, “Moreover, it’s worrisome that a municipality would not have the legal knowledge in such an elemental subject.”

Mora was not the only one caught by surprise. Claro regulations manager Victor Garcia charged that deactivation of the Alvarez installation would disturb service in Curridabat. He protested that the Mexican telecommunications company has followed the rules to the letter.

Walther Herrera, member of the telecom watchdog agency SUTEL, also lamented the court decision but admitted that only Curridabat’s city government had omitted an environmental study.

Commentary: Curridabat likely believed that since all the other cell installations had passed muster, surely theirs, identical to the rest, would pass environmental studies as well. SETENA is notoriously slow in giving the environmental green light and the municipal council likely wanted to save time.

In other countries, such roadblocks do not exist. In the United States, only wilderness areas lack cell coverage. Studies are not necessary for each cell installation any more than they would be required for a power or telephone line.

Indeed, we can’t resist observing that Alvarez’s reasoning reminds us of the suspicion that “new fangled” electricity aroused in the early 20th century. Salesmen traveled back roads to sell home owners plugs to put in unused outlets so the mysterious waves would not affect family members.

Indeed, we wonder if Alvarez filed his complaint to pander to older voters when he was running for nomination for president on the National Liberation Party. He has since settled for a top deputy post in exchange for his support of the candidature of San Jose Mayor Johnny Araya.
Source: Fijatevos