Samareño Promises to Give It All 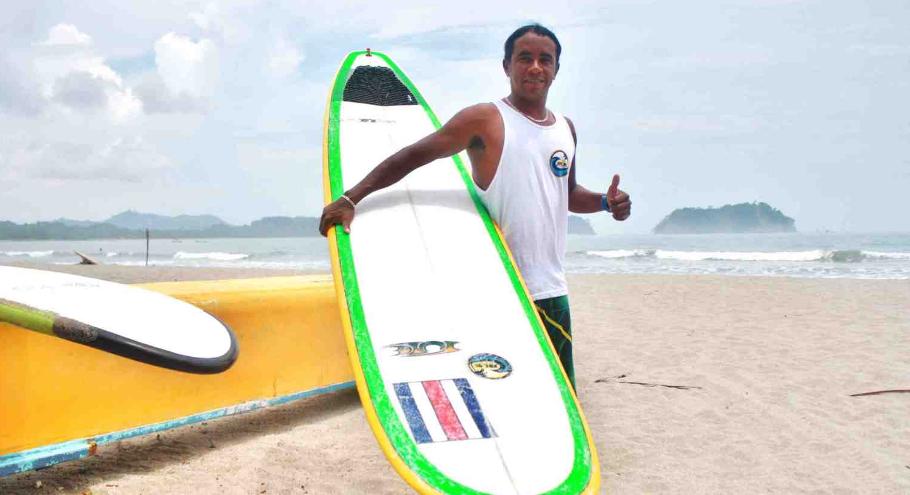 By Wilberth Villalobos Castrillo, Voz de Guanacaste –  With World Championship dreams… In this way the Samareño Alex “Choco” Gómez, ranked second in national standings in the longboard category, departs to participate in the next World Longboard Championship 2013, organized by the International Surfing Association (ISA) and held in Peru from September 22nd to the 28th.

Gómez , who will turn 38 next Monday just as the tournament starts, gives surfing lessons at Choco Surf Shop, his school located in Playa Sámara, and has surfed for 23 years. He will also participate in this competition next to the current national longboard champion Anthony Flores.

This is the first time the ISA has organized an exclusive world longboard category, in which surfers use boards with longer dimensions that were the first to be originally, before the short board revolution.

Surfers will compete at Playa Huanchaco, located in northern Peru, near the city of Trujillo. The beach is world-renowned for its world class waves and is famous for its long left with its sandy, rocky bottom and its long lines and inclined faces which are conducive to longboarding.

For his part, Carlos Enrique Brenes, press officer of the Costa Rican Surf Federation, explained that the national goal is to progress to the second round of the tournament, and that to achieve that would mean success.

Brenes also warned of the low temperature in which surfers will compete, which in some cases reaches five to zero degrees because surfers should wear wet suits, which reduce the effects of the cold but somewhat decreases the mobility of sportsmen.

In this regard, Gómez mentioned that he is aware of the cold but is confident that the suit will in fact provide the protection they need, and explained that he will have an advantage on the wave as he uses the Goofy position on the surf board (right foot forward), which will allow him to ride the wave facing forward.

Choco also mentioned that he has been watching videos of surfers who will compete in the championship to know them better and understand how to attack them during the championship. He also indicated that if he is in the same heat with Flores, they will possibly use a strategy of marking, which consists of preventing the other competitor from entering the wave first.

Gómez explained that the lack of sponsors was an obstacle to planning the trip, because although travel expenses are covered by the Surf Federation, he had to rent a car to travel to San José. However, he received a grant from the sports economic committee of the Municipality of Nicoya to pay to send the boards by plane from San José to Peru.

The two nationals will leave for Peru on Thursday the 19th of September. On Friday the 20th, there will be an official press conference, and the drawing for times and opponents of each of the surfers will happen on Saturday.

The matches will begin on Monday, September 23rd and can be seen live on www.isawlc.com/es.

QCOSTARICA - The contagion rate of covid-19 in Costa Rica in the last week did not change, a fact that is seen for the...
Turrialba