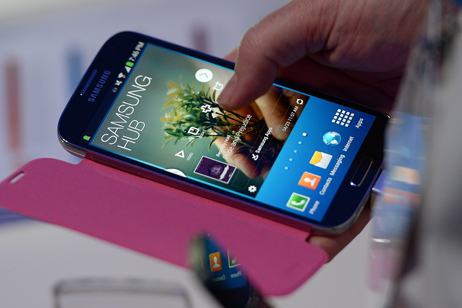 The mobile phone giant Samsung Galaxy S4 promises more speed, a bigger screen and a slimmer, lighter design than its predecessor, the SIII. 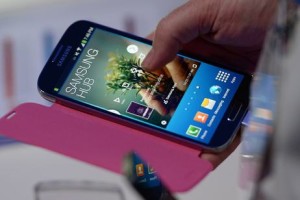 It is expected to be a major rival to Apple’s iPhone. Only the 3G version will be available at launch but it is expected that within two weeks the 4G LTE version – which promises much faster browsing – will hit the shelves.

Among some of the phone’s features is the so-called “Samsung Smart Pause”, which automatically pauses videos if you look away from the screen.

At launch, the phone will be available in black or white but more colour options are promised later in the year.

In this war of smartphones, as consumers we only have one question, Which Phone Is Better, the Samsung Galaxy S4 or iPhone 5?

You can listen to people dither on and on about their smartphone of choice, but there are really only two devices at the forefront right now: Samsung’s Galaxy S4 and Apple’s iPhone 5.

Call it hype. Call it marketing. But these are the two phones a lot of you will be choosing between this year.

So which one is the best? Well, that’s not an easy question to answer. The better question is, “Which one is best for you?”

Let’s break it down.

Hardware Features
Samsung loaded the Galaxy S4 with a ton of specialized hardware features. The phone’s front-facing camera can detect when you’re looking at it, so it can do things like keep the display bright while you’re reading or let you tilt the phone to scroll through pages. The phone also lets you swipe through photos and other items just by waving your hand over the screen.

Bottom Line: If simplicity suits you, go for the iPhone 5. If you want a bunch of flashy extras, go for the Galaxy S4.

Apps/Content Selection
Even though there are more Android users in the world, developers still prefer to make apps for the iPhone first. Apple has a unified system for all its mobile devices, which makes it easy for developers to make an app once and push it out to millions of users.

Since the Android ecosystem is scattered across several different manufacturers and devices, Galaxy S4 owners will have to wait longer than iPhone 5 owners to get new apps and significant updates.

Bottom Line: If you want the best apps, get the iPhone 5.

Operating System
Samsung’s Galaxy S4 runs on Google’s Android operating system, but Samsung has modified the look and feel with its own “skin” called TouchWiz. Still, Samsung does keep Android’s core features, so the experience isn’t radically different from other Android devices.

The benefit to using Android over using the iPhone is that it allows a greater level of customization, meaning you can do stuff like remove apps you don’t want and tweak your home screen with widgets that update with live information.

The iPhone’s operating system, iOS, is much more simplistic and easier for most people to use. It’s basically just a screen of static icons for apps. A lot of people criticize the iPhone software for being too simplistic, but you could also argue that’s been the key to the phone’s success.

Bottom Line: If you like customization, go with the Galaxy S4. If you want something simple and easy to use, go with the iPhone 5.

Design
It was a bit disappointing when Samsung decided to build the Galaxy S4 out of plastic. The build quality is OK, but not nearly as good as the iPhone 5’s all metal and glass design.

But the Galaxy S4 does have a 5-inch screen, which is a full inch larger than the iPhone 5’s screen. That could be a big draw for some people.

Bottom Line: If design and build quality matter to you, choose the iPhone. If you want a big screen, go with the Galaxy S4.

Conclusion
It really is a close call. Most people will be happy with either the Galaxy S4 or iPhone 5. It’s a matter of preference.

You have to ask yourself: Is a big screen and customization more important to you? If yes, then choose the Galaxy S4.

But if you prefer simplicity and the best selection of apps, choose the iPhone 5.

- Advertisement -
Paying the bills
Previous article4.7 Quake In Limón This Morning
Next articlePublic Pressue Did In The Sa José – San Ramón Concession