The Times They Are a-Changin’.  What was the exclusive realm of the Policia de Tránsito (Traffic Police) in Costa Rica is now becoming an everyday task for a select officials of the Fuerza Pública (police) and local municipal police forces, who are being trained and authorized to issue traffic fines. 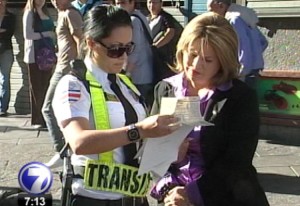 At the Municipalidad de San José, four officials have already undergone training, twelve more will do so in the coming 2 months and up to fifty in total by the end of the year.

Besides issuing traffic fines, local police also have the power to seize vehicles.

According to published regulations, responding to traffic accidents remains the exclusive jurisdiction of the the Policia de Tránsito.

The deputy minister of Transport, Silvia Bolaños, said in addition to the police forces of the 81 municipalities around the country, citizens wishing to work pro bono and security officers of the Universidad de Costa Rica (UCR) may be trained and deputized to act as Tránsitos (traffic officials).

QCOSTARICA - Six months after the start of vaccination against covid-19, will it be time to open the campaign to those who want to...
Nicaragua

QCOSTARICA - No doubt, vaccines are one of the most powerful tools to maintain control of Covid-19, but when it comes to entire populations,...
Expat Focus

QCOSTARICA - Costa Rica will have a system called "Interceptor" that will eliminate floating and suspended waste from the upper layer of its waters,...
Latin America