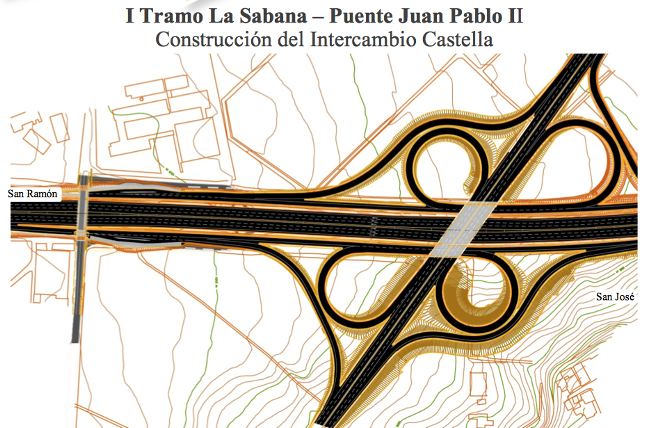 The extension and reconstruction of the San José – San Ramon road will start in the next six months, announced presidenta Laura Chinchilla on Monday.

The presidenta emphasized that an integral part of the contract is road maintenance, as Costa Ricans deserve better roads.

The San José – San Ramón work is divided into five stages that runs from La Sabana in San José, at the start of the autopista General Cañas to San Ramón in the province of Alajuela.

According to the ministro de Obras Públicas y Transportes (MOPT), Pedro Castro, the cost is US$523 million dollars and take 30 months to complete. The work includes the intervention of 8 bridges and the building of 10 overpasses, including some sections being expanded to four lanes and in the case of the Juan Pablo II bridge to eight lanes.

The 58 kilometres between La Sabana and San Ramón will be a concession road, similar to the Ruta 27 (San José – Caldera),  with five toll stations and under the management of the Brazilian company, OAS, for the next 30 years. The cost of the toll is expected to be ¢3.800 colones.

Besides having a ‘world class’ highway, minister Castro says that travel time between San José and San Ramón will be greatly reduced. It currently takes – without traffic congestion – about 45 minutes to travel the distance.

Although presidenta Chinchilla was positive and expressing satisfaction on achieving a goal that she says was a priority for her government, she predicted that the first objections will start appearing in “less than 24 hours”.

Ruta 1 or the Interamericana is the busiest road in Costa Rica. The section between the Juan Pablo II bridge and the airport was expanded to six lanes some years ago, doing away with shoulders and with two four lane bridges acting as bottlenecks.

Editor’s Note: The news of the approval clears up why literally and without explanation the reconstruction of the Bernardo Soto portion (airport to Recope) of the Ruta 1, came to a standstill several months ago. It also explains the MOPT’s feet dragging with the repair of the “platina” bridge.

QCOSTARICA -Viatris, one of the largest generic drug manufacturers in the world, announced the opening of commercial operations in Costa Rica, with an initial...
National

QCOSTARICA - For their preparedness to face tsunamis, the communities of Tamarindo and Sámara were recognized by the Junta Nacional Tsunami Ready de Costa...
Economy

QCOSTARICA - Costa Rica's banana growers reached an export record in 2020, despite the impact of the pandemic, shipping fruit in new markets and...
Vaccine

QCOSTARICA - The Ministry of Health authorized the use of AstraZeneca's Covid-19 vaccine on Friday, based on the conditional marketing authorization of the European...
San Jose

QCOSTARICA - After a year of no work, engineers, technicians, producers, cleaners, food and beverage personnel, among others, held a peaceful march this Thursday...
The Americas

Q REPORTS - U.S. President Joe Biden is expected to outline his vision of Washington's Latin America policy at the next Summit of the...
Fuel Prices

QCOSTARICA - At 12:01 am this Wednesday, fuels will be more expensive, as the third price hike of the year takes effect. The increase in...
HQ

QCOSTARICA - A 30-year-old man, who posed as a dentist, set up an office in the garage of a house in Siquirres, Limón, where...
Political Economy

QCOSTARICA - Spain had excluded Costa Rica from the list of risk countries to enter by air for presenting a negative covid-19 test (RT-PCR,...