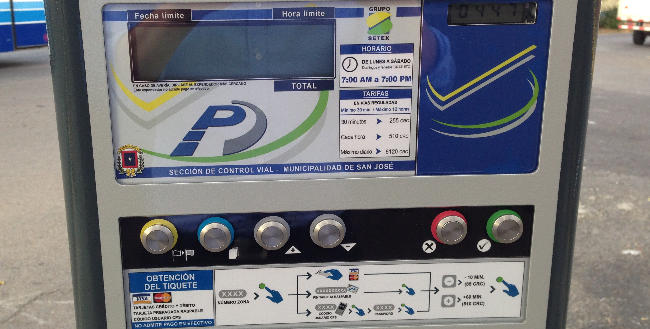 The electronic parking meters that are expected to bring order to San José’s street parking chaos are expected to be operational after Easter, according to the director de Seguridad Ciudadana de la Municipalidad de San José (MSJ), Marcelo Solano.

Solano confirmed that they have begun the installation of the 67 machines. To feed the meter (pay for the parking space) users will have three payment options: by text message, online payment or a prepaid card.

The cost to park at the new meter will be ¢255 colones per half hour (¢510 for the full hour, less than ¢700 or more at parking lots), but may change in the coming months, according to Solano.

The meters will allow municipal inspectors to use an electronic device – a handheld unit similar to that used by the Policía de Tránsito (traffic police) to fine vehicles.

The cost of the projest is around US$1 million dollars (US$14.900 per meter) in a contract awarded to the Spanish company Setex, that in addition to installing and maintaining the meters, will also promote their use.

Currently, the city of San José has 1.450 parking (legal) spaces. To park in any one of the spaces, the user has to obtain a “ticket” from a local vendor and place it on the windshield. A municipal traffic inspector (meter maid) monitor the spaces and issued parking fines to vehicles without or an expired ticket.

One of the major problems with this system is finding where the tickets are sold. In some areas, an attendant is nearby, keeping an eye on “his or her” spaces and ready to sell you a ticket and maintain it current if you overstay.

In many areas, however, tickets are sold by local businesses or even from private homes and many do not have a sign indicating the sale, thus leaving a driver to ask around as to where to buy the ticket.

QCOSTARICA - Good news for Ticos with traveling fever! From Friday, June 25, Germany will allow entry of travelers from Costa Rica as long...
Guanacaste