QCOSTARICA – Without an appointment or arriving ahead of time or after their scheduled vaccination against covid-19 caused long lines at the Clodomiro Picado Clinic, in Tibás, this Thursday.

Many of them had to wait up to two hours, some were vaccinated despite not having an appointment, and others were turned away, asked to wait to be called, according to the prioritization established by the Caja Costarricense de Seguro Social (CCSS).

Evelin Solano, head of Nursing at that Tibaseña clinic, confirmed the confusion, explaining that many of the people had even been called to come on Friday, but they showed up this Thursday with the intention of taking advantage of the remaining days of the Semana Santa holiday.

Solano added that some of the seniors arrived accompanied by up to four people, further aggravating the crowding outside the clinic.

Solano said the clinic allocates times for the vaccination to avoid lines and maintain social distancing if needed. “As has been repeatedly indicated, vaccination is by appointment and people must wait to be called from their health area, those who have a scheduled appointment must arrive on time at the time and day of their appointment. The personnel vaccinates according to that order,” explained Solano.

On Wednesday, the clinic published a message on its social networks asking those over 80 to attend even if they did not have an appointment, which would have caused more confusion among the insured. 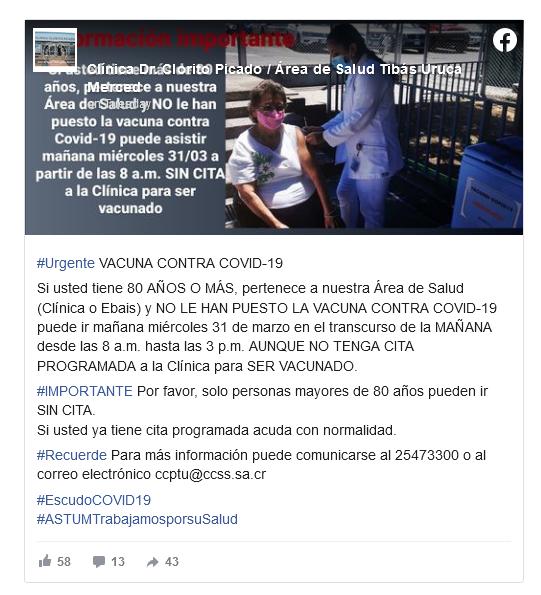 According to Solano, the call on social networks was made because people didn’t answer the phones and because in order to advance to the next age group, they first had to finish vaccinating those over 80 years of age; but she insisted that this measure only applied for that day, Wednesday, March 31.

In this way, on Wednesday, it was possible to vaccinate at least 50 people over 80 years of age.

Another of the facts reported by the head of Nursing is that people who had appointments for Monday, March 29, did not arrive until Thursday. All of these people were re-scheduled for the following week.

The same happened with patients who had an appointment for the morning on Thursday but arrived in the afternoon when they had already been replaced by other people, so they were also rescheduled for the other week.

According to Evelin Solano, only people with special conditions received the vaccine in the afternoon hours to avoid sending them home. By 4:00 pm, the clinic had already applied 235 doses of the Pfizer vaccine.

“It is necessary to reiterate that the areas program a number of doses to be applied per day, each bottle is opened, they have six hours to apply and they are prepared for people with an appointment. The population must collaborate in this titanic effort being carried out by the Caja’s staff, in an orderly and programmed way,” added the Caja’s press officer, Xinia Bustamante.

The Caja reported this Thursday that 65 health areas throughout the country are still applying vaccines against covid-19 during Friday.

With this initiative, the CCSS seeks to advance in the placement of first doses in the most vulnerable population that corresponds to group two, according to the schedule of the Ministry of Health, which includes those over 58 years of age.

QCOSTARICA - The number of patients with covid-19 is advancing by...
Read more

QCOSTARICA - The number of patients with covid-19 is advancing by leaps and bounds. This Monday, 571 people were hospitalized, 263 in an Intensive...
HQ

QCOSTARICA - Emily Vega Espinoza, 43, tragically lost her life when the car she was driving crashed head-on into a tanker truck. The incident occurred...
Security

QCOSTARICA - The Municipality of Heredia will place four surveillance cameras on a section of the General Cañas highway that has registered an escalation...
Colombia

QCOLOMBIA – Sexual activity in Colombia had negative effects as a result of the covid-19 pandemic. This was demonstrated by the results of the...
National

QCOSTARICA - The national weather service, Instituto Meteorológico Nacional (IMN) reported that intense rainfall will continue throughout the Central Valley, the Pacific and the...
Economic Recovery

QCOSTARICA - For the third consecutive night, the Ruta 32, which connects San José with Limón, was closed from 7 pm Friday and until...
Electric Vehicles

QCOSTARICA - The honeymoon of free charges at Instituto Costarricense de Electricidad (ICE) fast-charging stations is over for owners of electric car, as they...