Sexual Violence under the Ortega Regime

A month had passed since April 18 when the protests began, and we found ourselves thinking about what might happen if they arrested us. We’d never thought before about losing our freedom, much less that it could happen for exercising our right to inform.

But there we were, thinking that the worst thing the Ortega police could do to us wouldn’t be to kill us but to rape us. No cases had been documented at that point, but we knew that the first thing to go, after freedom, was women’s right to their bodies.

We thought about our options if the moment arrived: biting them, trying to kick them, struggling until the end; or telling them we had an STD to avoid being raped. We spent many nights with such speculations, amid the displacement forced on us by the constant death threats, and – obviously – threats of rape.

No one, no woman or man, wants to be in that situation. However, it’s become an imminent risk for all, since we’re aware that in Nicaragua the police kill, kidnap, rape and torture anyone who thinks differently than the Ortega-Murillo regime.

We already have a long history of abuse against women’s bodies on the part of the state and its officials.

With the women who were arrested, they began by taking their clothes off, forcing them to do sit-ups, exposing their bodies before the police and paramilitaries, touching them or even penetrating them directly or with some object.

Not just one police or paramilitary, but several. The men haven’t escaped either – some have been raped with AK 47 rifles.

We already have a long history of abuse against women’s bodies on the part of the state and its officials. For that reason, thinking about such things wasn’t the result of the collective hysteria of the moment, but of a palpable reality, although one that many of us resist admitting.

A president with two (public) denunciations for rape. A boxer accused of rape and aggression. A representative of Nicaragua before the Central American Bank for Economic Integration accused of rape and corruption of minors. A lower level public official absolved of the crime of rape with a verdict that he fondled the victim due to a “fit of madness”, “furor” and sexual “arousal” caused by ingesting beer. 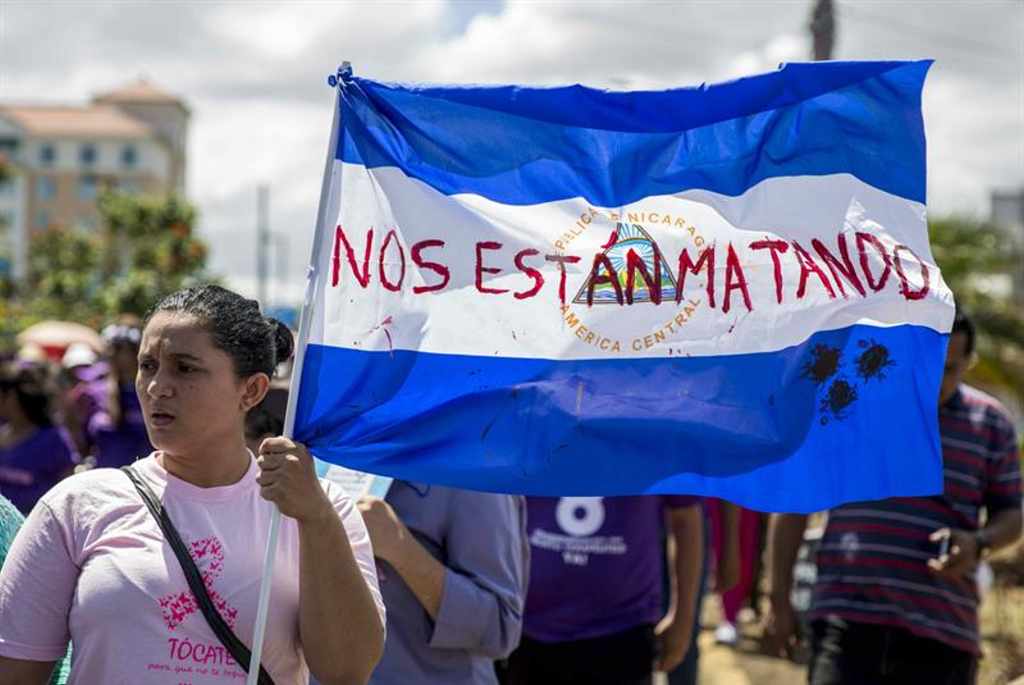 In Nicaragua, there’s a culture of impunity that ends in the courtroom, but begins in the home, the bed, the streets and the social networks.

In the last eleven years of the Ortega government, we’ve seen a brutal shift backwards with respect to human rights. There’s also been a degrading of the image of women that different organizations had been struggling to reverse.  Other governments supported the same rubbish, but weren’t as cynical and degenerate as the Ortega-Murillo pair.

What we see today is merely the tip of the iceberg. It’s on raw display in the stories of sexual abuse and rape – both inside and outside of the police cells – used as a torture against those who exercise their right to protest or to free expression. Or, worse yet, when the women demand a morning after pill to make sure they haven’t been impregnated by their abusers.

In the current context, the state violence is the most prevalent, but let’s not forget how between May and June there were constant media images of mobs of women from the Ortega camp and also those from the blue and whites. Once again, the bodies of women in the midst of a political crisis. They’ve also had the whim of putting down others due to their sexual preference.

But I’m also a woman and a feminist, and if we really want a #NicaraguaLibre, we must be alert and note that women, notwithstanding our ideology, have RIGHTS and NOONE should be allowed to step on them, much less the State whose representatives must pay for this when their time comes.

Two men arrested of touching buttocks of cyclist while pedaling

(QCOSTARICA) Two men could end up spending from three to six...
Read more

(QCOSTARICA) It's the weekend but it doesn't feel it anymore because the pandemic took away the weekend outings for a beer - a cerveza...
Immigration

(QCOSTARICA) Since last March 6, when the first case of positive case for Coronavirus was reported in Costa Rica, unleashed was a series of...
Health

(QCOSTARICA) Going door to door, almost 1,500 primary care technicians working in Ebáis clinics across the country will return to the streets, in an...
Bolivia

(Q24N) With roughly one month to go until the Bolivian general election, the country is descending into violent political strife. On September 20, for...