Shortages in Venezuela make standing in line a full-time job 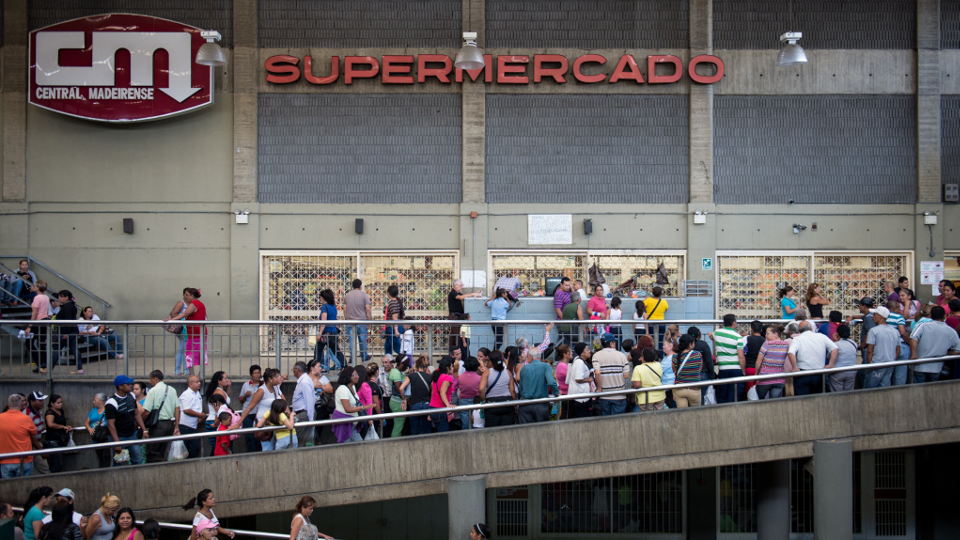 TODAY VENEZUELA (Fusion.net) CARACAS — In Venezuela, grocery shopping has literally become a test of endurance. Venezuelans are fuming as long lines at the country’s supermarkets worsen, with people even camping out overnight — some in hammocks — to try to buy hard-to-find basic items such as bread, toilet paper and detergent.

Even in a country where waiting in line for hours is the norm, the last few weeks have brought some truly jaw-dropping scenes — lines snaking for blocks, shoppers arrested for protesting shortages, and National Guardsmen standing over store employees handing out goods.

The shortages reflect the deepening economic troubles in Venezuela, a country with the world’s biggest oil reserves— and the the most crippling oil dependency.

Each day, hundreds of people line up outside Bicentenario, a state-run supermarket, waiting for subsidized goods such as milk, flour and other basics that are in short supply.

The lines are just as long at privately owned supermarkets, like this one in an upscale neighborhood in Caracas.

The shortages have even sometimes sparked stampedes when goods eventually arrive. Here’s what happened when word spread a store received a new stock of diapers.

In response, the government has banned people from forming lines during certain times of the day. This week, three governors allied with President Nicolas Maduro banned shoppers from standing in lines late at night. State-run supermarkets have also restricted access to shoppers based on their state ID numbers, with certain people allowed to shop only on select days.

While there are no recent figures detailing the scarcity of goods, annual inflation in Venezuela is running at more than 60 percent and the U.S. dollar sells on the black market for 30 times the official exchange rate.

With oil prices at their lowest in six years, Venezuela’s foreign export earnings — of which 96 percent come from oil — have fallen dramatically.

For Maduro, the worsening economic conditions have meant a sharp plunge in his approval ratings, which now stand at around 22 percent. He was elected to office after the death of Hugo Chavez nearly two years ago as his hand-picked successor and has continued to follow his predecessor’s policies.

That makes it hard for the government to adopt the pragmatic economic measures like ending currency controls enacted more than a decade ago by Chavez. Many economists blame the controls and other economic measures for provoking the shortages. Tight currency controls mean that obtaining hard currency to import products is getting tougher. That’s why the dollar sells for such a high value on the black market.

But the biggest impact is felt on the streets. Even a trip to the pharmacy can take hours.

Lines are worse in the provinces and border areas. Smuggling is also rife because of the big difference between the cost of price-controlled goods on the Venezuelan side and the free market prices in Brazil and Colombia. At the Venezuela-Colombia border near San Antonio-Cúcuta, hundreds of people walk across every day carrying bags of pasta, rice, vegetable oil and other basic goods.

Gas prices in Venezuela are the cheapest in the world, thanks to subsidies that cost the government $12 billion a year. At the Colombia and Brazil borders with Venezuela, many people spend all day smuggling gas across, pocketing huge profits.

In Caracas, the shortages have spawned a new profession: some people are actually getting paid for simply standing in line for others. While it’s putting money in some people’s pockets, this is the line they have to wait in to deposit it in the bank.

QCOSTARICA - The vehicle restriction of odds and evens...
Indicators