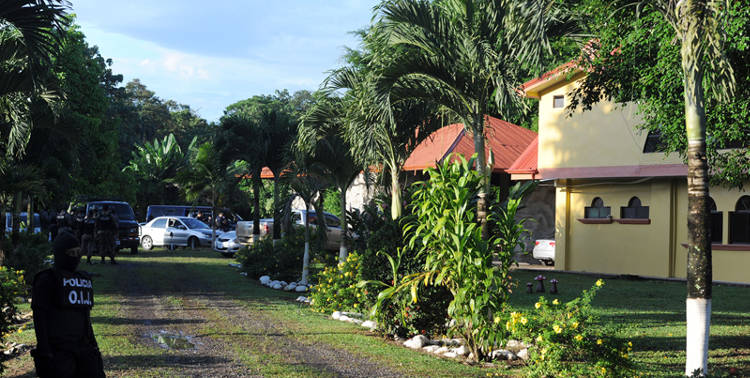 The municipal councilor of Siquirres, in the province of Limón, Krysbell Ríos Myrie, appears as the legal representative of the company that owns one of the properties raided last week by authorities, in Catalina de Siquirres, Limón.

In the raid of the 600 acre property known as Finca Los Peraza, authorities uncovered two helipads and a series of underground canals connected to the Caribbean Sea, for which, apparently was used to move illegal drugs.

According to a report in La Nación, the daily tried to reach Krysbell Ríos, but her cell phone has been off and has not been seen at the municipal offices since.

Arturo Castillo, president of the Siquirres municipal council, told La Nacion he has not been able to reach Krysbell Ríos either.

The municipal councilor is married to Geovanny Peraza Castillo, who according to Registry records is the president of Investments AyB Peraza Rios del Caribe S.A., owners of the property in La Catalina.

But the story goes back some weeks, to an incident that led authorities to investigate and discover a cache of arms, fuel and two helipads located in a farm in Limoncito de Cutris de San Carlos, in the northern zone, near the Nicaragua border. The find led to the discovery of more helipads and suspected drug processing centres in Limón.

Authorities began looking into Peraza following his arrest by the Policia de Fronteras (Border Police) on October 5, near the tourist centre Boca Tapada de Pital, San Carlos. He was later set free, alleged to have offered officials a bribe.

Peraza’s nephew was also arrested by border police near the same location.

The arrested allowed the Organismo de Investigación Judicial (OIJ) to follow the trail of the two men, leading them to the discovery of the arms and helipads.

Authorities dug deeper when they learned that Peraza had left the country on October 9, five days after his arrest, returning two weeks later on October 23.