Brazil’s President Highlights Scope of Lighting for All Program 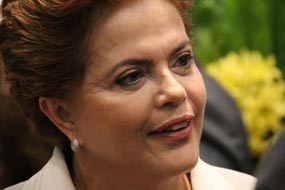 (QBRAZIL) Brazilian President Dilma Rousseff stressed today the scope of the Lighting for All program that, after completing 10 years of its launching, brought electricity to 3.1 million families in rural areas. In her usual Coffee with the President radio program on Monday, Rousseff highlighted the investment in a decade of about 20 billion reais (about nine billion USD) to improve the quality of life of millions of citizens.

The president recalled that this program began in 2003, with the government of Luiz Inacio Lula da Silva, and the objective was to lighten the lives of two million families, but the demand was greater and then decided to bring electricity to more than three million homes.

As an example, she mentioned the residents of the Marambaia Island, in the coast of Rio de Janeiro, where the electricity came two years ago, benefiting 90 houses in a community of Quilombo (a black population area with descendants of slaves from the 19th century).

Rousseff said that since 2011, with the beginning of her government, the Lighting for All program has favored about 1.7 million people, but according to a census from the Brazilian Institute of Geography and Statistics, more than 716,000 Brazilian families still live without electricity.