Apple’s snarky personal assistant has it out for Google’s Glass, (styled “GLΛSS”), the wearable device with an optical head-mounted display (OHMD), easily one of the coolest gadgets of the year. 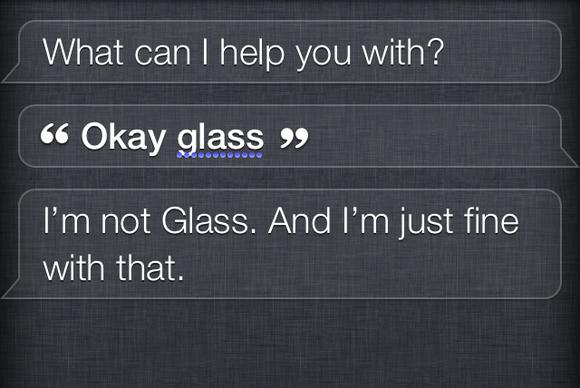 Telling Siri, “Ok Glass,” earns you a smart aleck response that can only be described as unfavorable. Some of the responses we got included jokes about Glass being “half empty” and Siri telling us to stop trying to strap our phones to our foreheads.

It’s unknown if Siri’s smack talk is anything new, but with Apple rumored to be launching a smartwatch in the coming months, it makes sense that the company would try to put down Google’s piece of wearable tech as much as possible.

So what happens when you ask Google Now, the service powering Glass, about Siri? You get the stock index of Sirius satellite radio (SIRI).

It’s nice to see Siri hasn’t lost its sense of humor, though we’re not sure what Google or Google Glass users have to say about it.

I also got these responses from Siri when I said “okay glass.” If you get some other response from Siri then lets us know in the comments and please share the screenshot.