Sloths and Porcupines Under Attack in Costa Rica 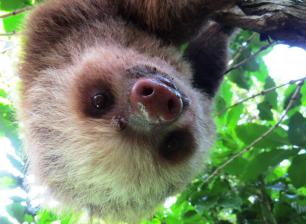 An unidentified farmer in Golfito, a community located in the southern Pacific coast of Costa Rica and near the southern border with Panama, recently saved the life of a female sloth that had been subject to a horrific attack by two men thought to be in their 30s. According to news reports by daily newspaper La Teja, the sloth was hit by rocks and fists, particularly in her head and stomach. 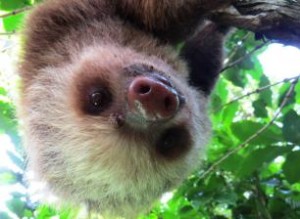 The farmer confronted the despicable men, rescued the sloth and contacted local wildlife protection agents. Despite the farmer’s heroic intervention, the sloth was left in a delicate condition and was evacuated by aircraft from Golfito to Base Two of the Juan Santamaria International Airport (SJO) in Alajuela. The arboreal creature flew aboard a Sansa commuter flight.

Once at SJO, the sloth was rushed to Zoo Ave Animal Rescue in La Garita. Zoo Ave is one of the premier wildlife refuge centers in Costa Rica; it is dedicated to rescue, research, rehabilitation, education, habitat conservation, and more. The sloth, which has been named “Sansita” by the Zoo Ave staff, is currently quarantined in a space that measures 20 meters in length. According to Sergio Gonzalez, spokesman for Zoo Ave, Sansita requires assistance with feeding and could end up blind. She requires dressing changes and antibiotic applications every two hours.

Caring for Sansita will probably cost Zoo Ave almost a million colones (about $2,000). She will eventually leave her quarantine space, but she will remain in the Zoo Ave rehabilitation forest.

The Sad Reality of Wildlife Abuse in Costa Rica

The abundant and diverse wildlife of Costa Rica enjoys certain protections; but, unfortunately, there are always a few irrational and inconsiderate humans who will prey on animals with abuse. Case in point: A porcupine under the care of Zoo Ave that was victim of three swift machete strikes. This two-year old animal was found in Heredia and underwent a four-hour lifesaving surgery; still, it lost an eye.

Sansita is not the only sloth at Zoo Ave that was victimized by humans; she is the fifth in recent months. One sad case is that of Florecita, a young, three-toed Bradypodidae female sloth that became an orphan when her mother was killed by soulless humans in San Isidro of Heredia. Florecita arrived at Zoo Ave in a state of confusion, disorientation and depression. She is slowly (no pun intended) growing up without her mother, and Zoo Ave staff believe that she could improve to the point of becoming a candidate for release in Guanacaste.

Sloths are gentle animals that have become emblematic among Costa Rica’s numerous forest species. They have done a lot in terms of promoting our country’s rich diversity and have even achieved celebrity status. They deserve better than to be attacked by insensitive humans.