Twerking (/ˈtwɜrkɪŋ/) is a type of dancing in which the dancer, usually a woman, shakes her hips in an up-and-down bouncing motion, causing the dancer’s buttocks to shake, “wobble” and “jiggle” 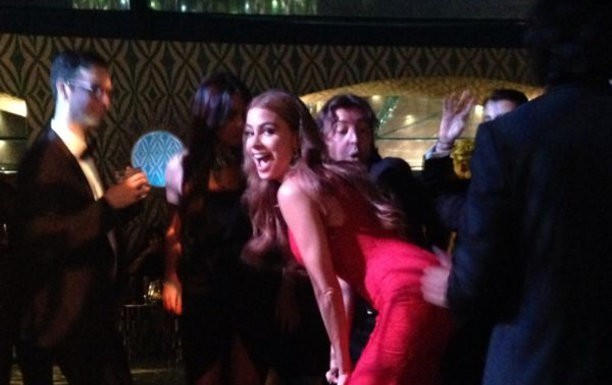 Sofia Vergara posted some shots of her twerking at the Emmy awards the other night on her WhoSay page. The Twerking took place at Jimmy Fallon’s after-party and by all accounts Miley Cyrus has some serious competition.

In the picture Sofia Vergara posted, the onlookers seem delighted at as they watch her do her thing. It isn’t clear from the pics who the lucky receiver of the twerking is; suffice it to say he probably went home pretty happy.
- Advertisement -

Vergara also accompanied one of her photos with the bold caption, to fellow celeb Miley Cyrus: “Miley cyrus this is where the twerk was invented. Colombia!” In a later caption she also said: “Sorry @jessetyler this is how we dance some times.”

It seems Sofia really had her party shoes on as she attended three after-parties throughout the night. Fallon’s, the Fox party and the HBO bash. Furthermore she wasn’t alone in her partying as she flew here family in from Colombia to join her.

After she showed up with a huge entourage at the after-parties, twerked a bit and did some drinking, she ended up eating a greasy cheeseburger at a local burger joint. Well, twerking IS hungry work.