AFTERBIZLIFE (Extreme Tech) –  Researchers at Michigan State University have created a fully transparent solar concentrator, which could turn any window or sheet of glass (like your smartphone’s screen) into a photovoltaic solar cell. Unlike other “transparent” solar cells that we’ve reported on in the past, this one really is transparent, as you can see in the photos throughout this story. According to Richard Lunt, who led the research, the team are confident that the transparent solar panels can be efficiently deployed in a wide range of settings, from “tall buildings with lots of windows or any kind of mobile device that demands high aesthetic quality like a phone or e-reader.” 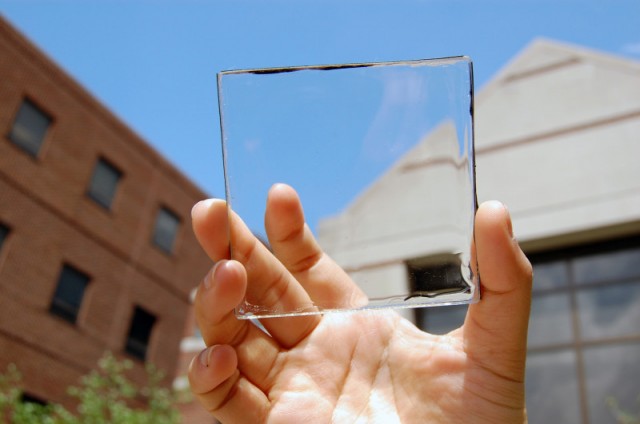 Scientifically, a transparent solar panel is something of an oxymoron. Solar cells, specifically the photovoltaic kind, make energy by absorbing photons (sunlight) and converting them into electrons (electricity). If a material is transparent, however, by definition it means that all of the light passes through the medium to strike the back of your eye. This is why previous transparent solar cells have actually only been partially transparent — and, to add insult to injury, they usually they cast a colorful shadow too.

o get around this limitation, the Michigan State researchers use a slightly different technique for gathering sunlight. Instead of trying to create a transparent photovoltaic cell (which is nigh impossible), they use a transparent luminescent solar concentrator (TLSC). The TLSC consists of organic salts that absorb specific non-visible wavelengths of ultraviolet and infrared light, which they then luminesce (glow) as another wavelength of infrared light (also non-visible). This emitted infrared light is guided to the edge of plastic, where thin strips of conventional photovoltaic solar cell convert it into electricity. [Research paper: DOI: 10.1002/adom.201400103 – “Near-Infrared Harvesting Transparent Luminescent Solar Concentrators”]

If you look closely, you can see a couple of black strips along the edges of plastic block. Otherwise, though, the active organic material — and thus the bulk of the solar panel — is highly transparent. (Read: Solar singlet fission bends the laws of physics to boost solar power efficiency by 30%.) 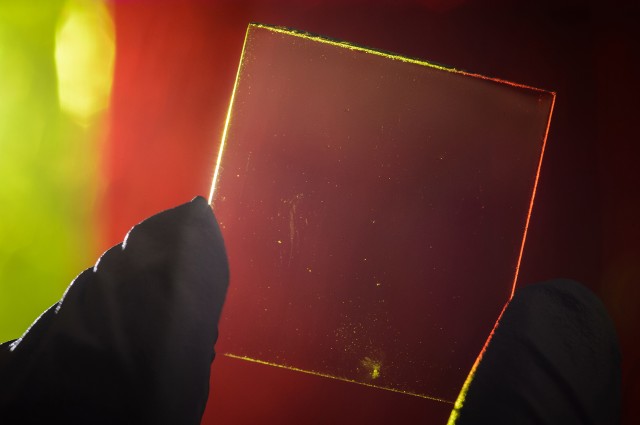 Michigan’s TLSC currently has an efficiency of around 1%, but they think 5% should be possible. Non-transparent luminescent concentrators (which bathe the room in colorful light) max out at around 7%. On their own these aren’t huge figures, but on a larger scale — every window in a house or office block — the numbers quickly add up. Likewise, while we’re probably not talking about a technology that can keep your smartphone or tablet running indefinitely, replacing your device’s display with a TLSC could net you a few more minutes or hours of usage on a single battery charge.

The researchers are confident that the technology can be scaled all the way from large industrial and commercial applications, down to consumer devices, while remaining “affordable.” So far, one of the larger barriers to large-scale adoption of solar power is the intrusive and ugly nature of solar panels — obviously, if we can produce large amounts of solar power from sheets of glass and plastic that look like normal sheets of glass and plastic, then that would be big.

QCOSTARICA - No doubt, vaccines are one of the most powerful tools to maintain control of Covid-19, but when it comes to entire populations,...
Weather

QCOSTARICA - Characteristic of the rainy season, we will see rain in the afternoons and nights in the Central Valley, the entire Pacific coast,...
Peru

Q REPORTS (DW) In Peru, the left-wing village school teacher Pedro Castillo has in all probability been elected the new president. The fact that...
Rico's Digest

QCOSTARICA - Costa Rica's legislature approved, in the first debate, a bill that reduces the minimum amount that a foreign pensioner or rentier must...
Environment