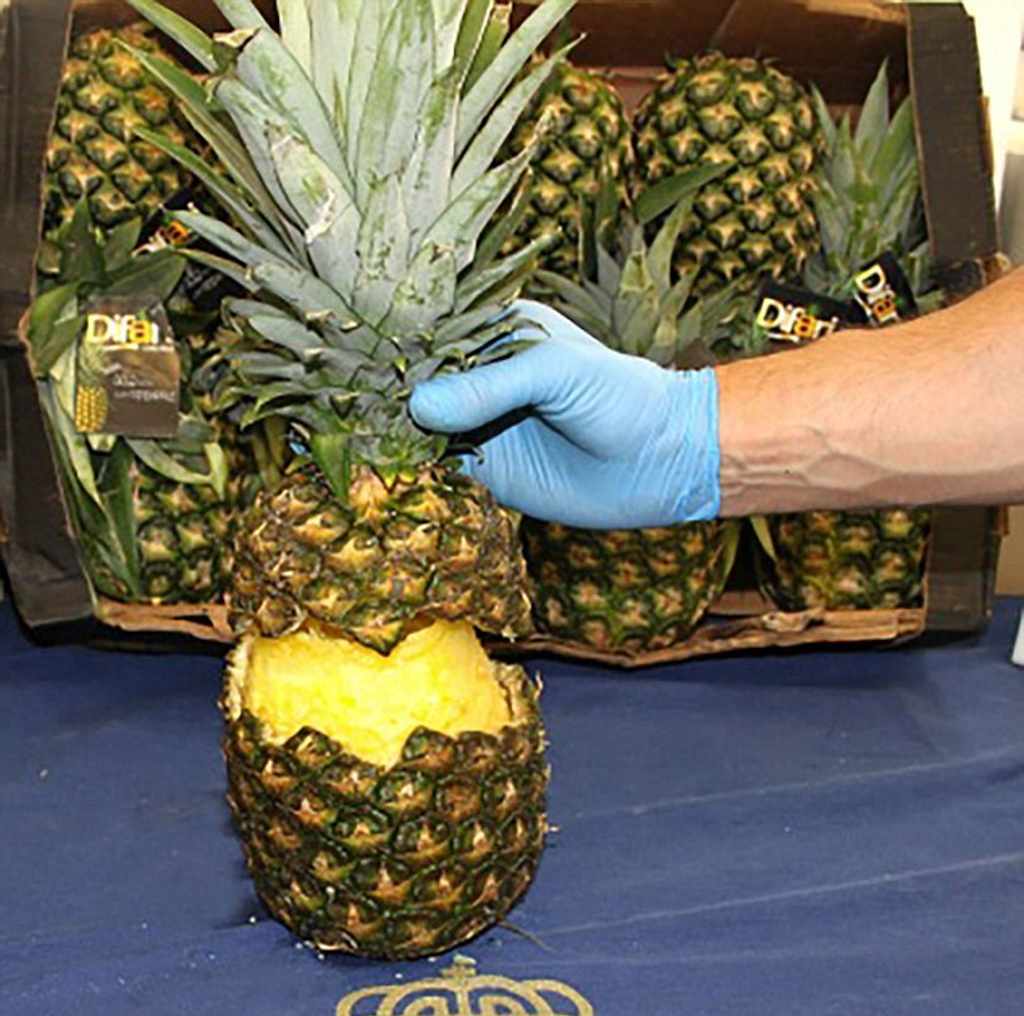 Spanish police have seized 67 kilos (148 pounds) of cocaine found inside hollowed-out pineapples discovered at Madrid’s main fruit and vegetable market, Mercamadrid. The drug-stuffed fruits were among a shipment of pineapples that arrived in the Portuguese port of Setubal by ship from Costa Rica. 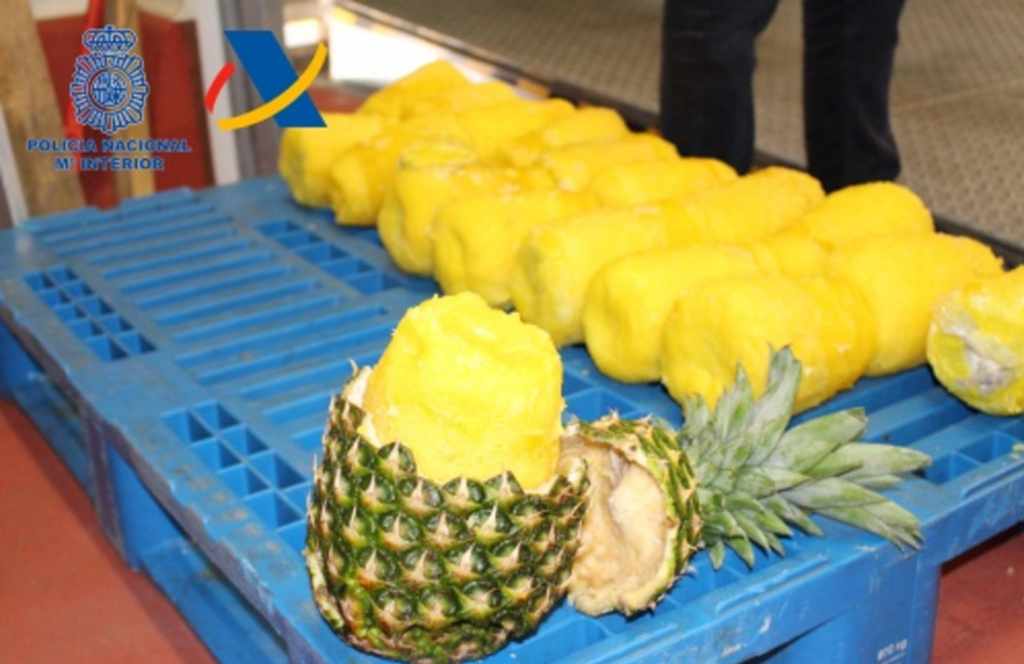 The fruits are said to have then been transported overland to the Spanish capital.

Authorities in Spain said each pineapple was ‘perfectly hallowed out and stuffed with compact cylinders’ containing 800 to 1,000 grams of cocaine. The operation was described as Premeditate, with an almost surgical preparation and a lot of creativity.

The fruit was coated with wax or yellow paraffin to conceal the ‘odors of the chemical products which the drug contains and avoid its detection’, the statement said.

Police arrested seven people as part of the operation – three in Madrid and four in Barcelona – who are suspected of playing a role in the cocaine smuggling operation.

The Costa Rican pineapple is one of the most sought out in the world market, but – also – cocaine. Combining the two is so attractive for criminal organizations that they prefer to set up companies in Costa Rica to make shipments. 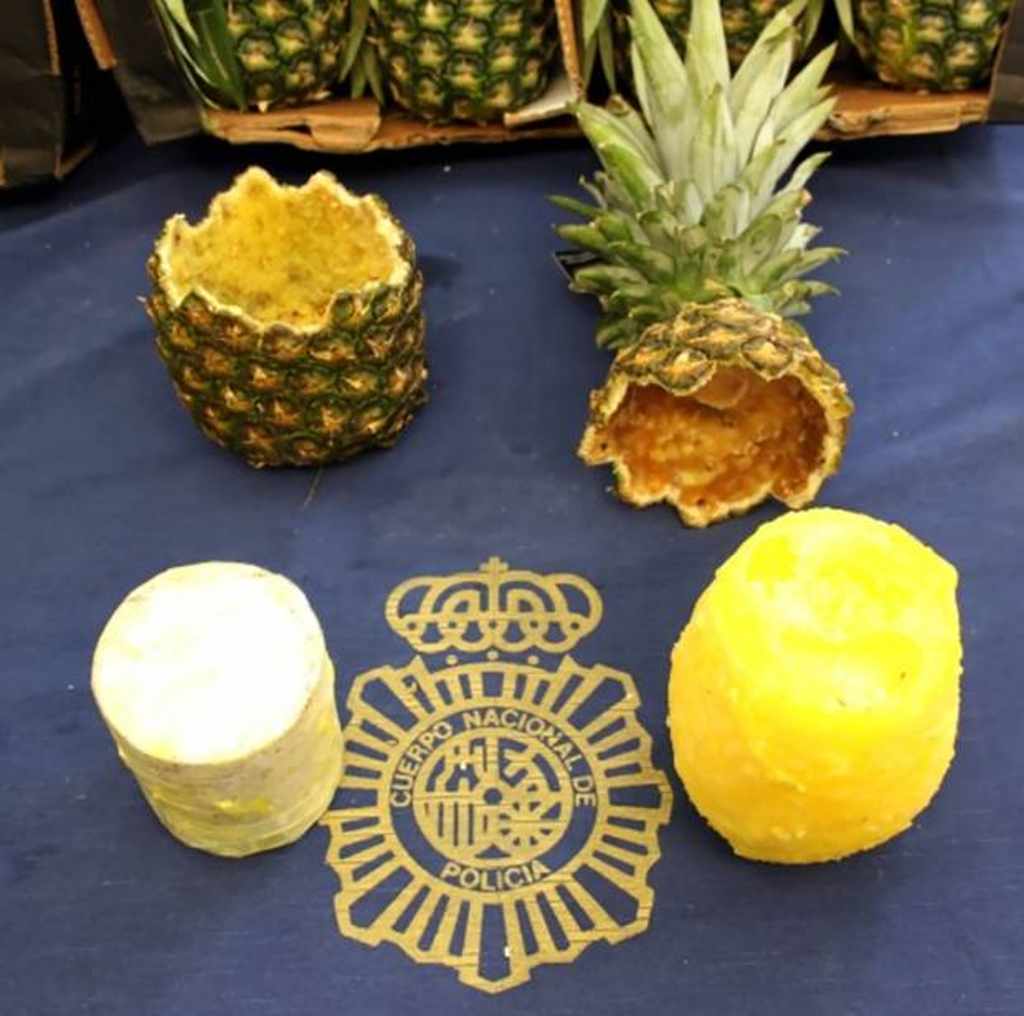 Germany, Holland, Spain, Portugal or Ireland are some of the destinations of shipments from Costa Rica.

Authorities in Costa Rica explain structures, with links in Europe, in farms and houses camouflage the drug fruit or in components that travel in the container (with the fruit).

Apparently, an export company that shipped the load discovered on Sunday, was registered in Costa Rica and used as a front.

“In Europe, a kilo of cocaine can go for  50,000 euros,” explained Michael Soto, Minister of Security, when referring to a Costa Rican cell dedicated to sending cocaine to Germany inside platforms for pineapples, which was disarticulated on August 22.

Soto assured that this ‘modus operandi’ is not recent. It is even possible that other groups use it to send drugs to other continents. There are shipments detected on pallets, refrigeration equipment or under floorboards.

The minister explained that the export company was registered in 2016, with a legal address in Curridabat (San Jose), though the production farm is located in Pital de San Carlos.

The Ministry of Public Security (MSP) hopes that the use of scanners in ports – in the medium term – will reduce this type of case, which according to the Costa Rica Chamber of Exporters “these events not only negatively impact the image of the country in the main export destinations, they also show the high incidence of organized crime, making this situation a problem that not only affects the export sector , but national security. ”

UN lowers its growth prospects in Latin America due to war