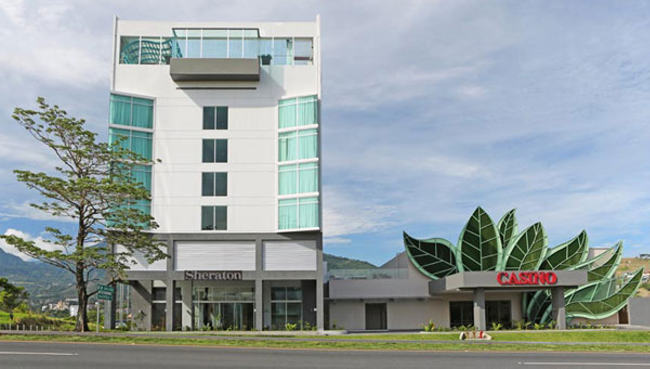 The Sheraton San José has an easy access from the Aeropuerto Juan Santamaria airport. The key commercial hub, Escazú, boasts offices of various world-class retail companies such as Guess’  and Tiffany & Co. as well as the first Costa Rican outlet of the leading coffee maker, Starbucks Corporation .

The hotel featues 172-guestrooms and a hard to miss casino, announced with big bright glittering lights.

Starwood has appointed the Colombian company, GHL Hoteles (with hotels Colombia, Panama, Peru, Ecuador, Chile and Argentina) for managing the property. GHL’s association with Starwood goes back to the days when the former managed the operations of Sheraton Bijao Beach Resort, Panama.

With this opening the company has moved a step ahead towards fulfilling its dream to operate 100 properties in Latin America by the end of this year. With a population of around half a billion, the region’s emergence as a business hub and its fast-growing economy caught the attention of the hotelier.

Starwood which currently operates 76 hotels in Latin America plans to take advantage of the surge in demand in Latin America. In this regard, the hotelier aims to open seven hotels each year on an average for the next five years, thereby increasing its Latin American portfolio by 50%.

This Zacks Rank #2 (Buy) company sees more opportunities for its largest brand, Sheraton, in Latin America. Starwood plans to add four more hotels to the list of more than 30 Sheraton branded properties operating across Latin America, within 2014. Starwood is continuously trying to boost the Sheraton brand, which is likely to reach the benchmark of 500 hotels worldwide by 2015.