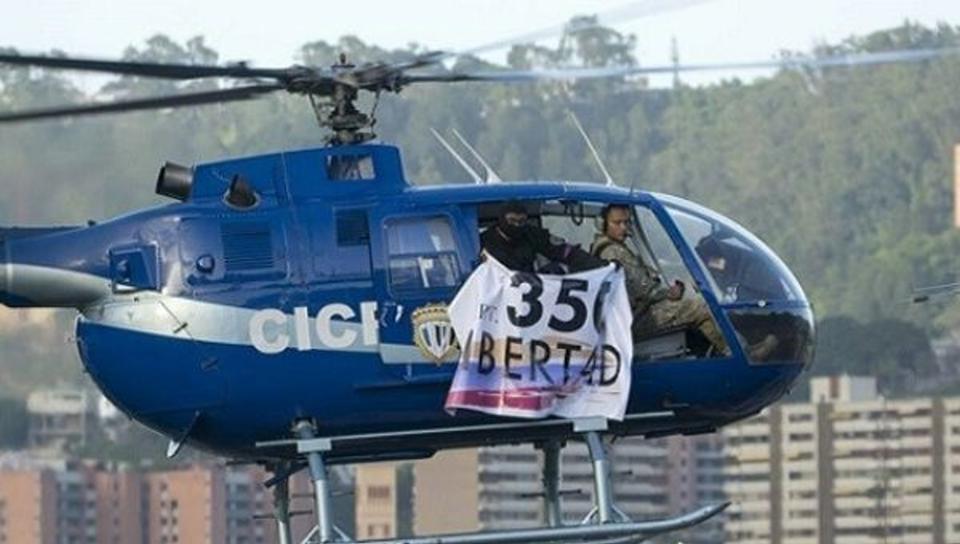 TODAY VENEZUELA – A helicopter from the Venezuela’s Scientific, Penal and Criminal Investigations agency was stolen Tuesday evening, circled around the Supreme Court building, firing shots toward the building, followed by two explosions which were said to be grenades, according to official sources.

The top court’s building in northern Caracas was sealed off after the national guard repelled the attack, which occurred around 5 p.m. local time.

A banner was unfurled from the helicopter that read, “350 Libertad,” in reference to article 350 of the Bolivarian Constitution that opposition forces are attempting to invoke to stop the National Constituent Assembly.

The Minister of Communication and Information Ernesto Villegas denounced the armed attack, identifying Oscar Alberto Perez as the pilot who shot 15 times at the Interior Ministry, where 80 people were still at work. He then headed to the TSJ, throwing four grenades in total, where a session of the Constitutional Court was taking place. Perez is said to be an inspector with the CICPC and took off from the La Carlota airbase with the stolen helicopter.

Villegas reiterated that “these types of terrorist attacks will not detain the Constituent Assembly due on July 30.”

Despite rumors to the contrary, all was calm in the capital area after the attacks, according to media reports from teleSUR.

President Nicolas Maduro said that because of the rapid reaction to the coup attempt by Venezuelan forces, many civilian lives were saved as grenades and shots rang out near the Supreme Court building as well as the Interior Ministry building.

“The entire air defense and detection plan was immediately activated to guarantee the people’s right to peace against an armed attack,” he added.

“We are going to capture the person responsible for this terrorist act,” Maduro said, indicating that the pilot works for Miguel Rodriguez Torres, who is being investigated for ties to the DEA and CIA.

Supreme Court President Maikel Moreno said that damages to the building were being assessed and said the court would release a statement tomorrow.

QCOSTARICA - Guanacaste has everything to be a prosperous...
National