After a four months’ lapse in which the office of the Defensora de los Habitantes (Ombudsman) has remained vacant, lawmakers have reappointed Ofelia Taitelbaum to the post. Although Taitelbaum eventually won out by a 35 votes out of the 41 lawmakers present, she had to endure some harsh criticism of her first two term performance. 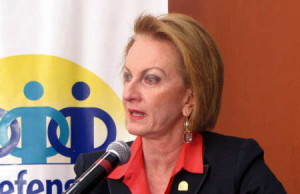 In the end Tuesday night, however, votes for others were scattered and few. Debate occupied a bit more than seven hours, highlighted by strong criticism by Social Christian deputy Walter Cespedes for what he saw as tepid opposition to the border road (trocha) on the south bank of the San Juan River.

PASE deputies Victor Emilio Granados and Rita Chaves also criticized Taitelbaum for what they saw as a lack of effectiveness in coming to the aid of disenfranchised elements of society. “If we select the same person we’re going to have the same results in the Ombudsman’s office,” snorted Granados.

Granados’ own choice was journalist Jose Rodolfo Ibarra but was unable to convince others that Ibarra would be better. Granados and Chaves specifically stated that during her first term, Taitelbaum had not lobbied effectively for the handicapped, from parking spaces to study opportunities.

A former legislator, Taitelbaum, 65, actually served two terms previously as Defensora de los Habitantes as the Ombudsman’s office is called here. She has an undergraduate degree in biology from the University of Costa Rica and a graduate degree in business administration from the prestigious INCAE private university.

She is the first Ombudsman to repeat terms in the office, having been first named to the post on Dec. 16, 2009 until Dec. 15, 2013. The second term came when she was again named while still a National Liberation deputy.

National Liberation Party, Citizen Action Party (PAC) and the Libertarians voted in blocs for her. Social Christian Unity party whip Rodolfo Soteomayor announced that his colleagues would vote their consciences. But PAC’s Manrique Oviedo broke away from his party colleagues over the abortion issue, which he alleged Taitelbaum favors.

QCOSTARICA - Vaccination centers against covid-19 were transformed this Saturday to be able to vaccinate more people. Universities, civic centers, parking lots and even...
Tourism

QCOSTARICA - This Sunday, the Guanacaste Airport - a member of the VINCI Airports network - received the first of the daily flights from...
Entertainment

Q24N - Arriving in the Guatemalan capital about two hours late, after the plane in which she was traveling had to turn around due...
Peru