Tennessee judges investigated for “trips” they took to Costa Rica 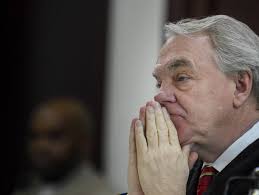 (AP) – Two Tennessee judges investigated for trips they took to Costa Rica have been disciplined.

Moreland told federal prosecutors that other Nashville judges and attorneys traveled with him, hired prostitutes and used marijuana. Prosecutors say the trips created “an atmosphere of cronyism and favoritism” in Moreland’s court.

Nashville lawyer Brian Manookian filed complaints against Holt and Watkins before the state board of judicial conduct. Judge and board chair Dee David Gay wrote in a letter that the board took action, but didn’t specify the punishments.

Watkins and Holt have denied wrongdoing, but a letter sent to Manookian in June confirmed the board investigated the complaints and that “appropriate disciplinary action has been taken.”

The letter, sent by judge and board chair Dee David Gay, does not explain the extent of the disciplinary action. Tennessee law allows for a wide array of discipline against judges to remain secret.