The Abuse of Ecstasy: MDMA in Costa Rica 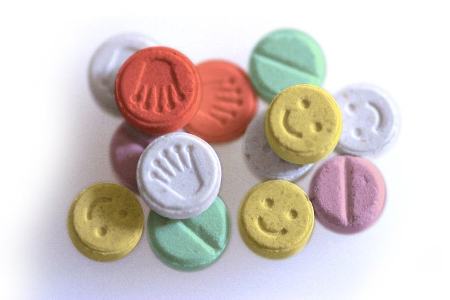 Two recent articles in online news daily Costa Rica Hoy (CRHoy) call attention to the rising trend of Ecstasy use in Costa Rica.  Ecstasy is a common English slang name for amphetamine-based street drugs typically manufactured in pill form. In Costa Rica, these drugs are referred to as “extasis,” “cristal,” or even molly, which is a trendy slang term for them in North America.

A recent article by Viviana Arce of CRHoy details an interview given by “Fernanda,” the fictitious name given to a 23-year old female university student in Costa Rica who is fond of going out to weekend parties and dance clubs where she ingests up to five tabs of Ecstasy in one night, often combining them with other substances such as alcohol, lysergic acid diethylamide (LSD) or ketamine. NOTE: Fernanda admits she has developed tolerance for these substances, but this in no way shall ever be construed as being anything except irresponsible and risky behavior. According to CRHoy, Ecstasy is becoming a drug of choice among young middle-to-upper class Ticos who enjoy going out to clubs where electronic dance music (EDM) is played.

What Fernanda and other users of Ecstasy in Costa Rica hope to get whenever they get their hands on some pills is that they are mostly 3,4-methylenedioxy-N-methylamphetamine (MDMA). In the past, this empathogenic stimulant has been used for therapeutic purposes, and to this day it continues to be evaluated for medical uses such as the treatment of patients who suffer from post-traumatic stress disorder. As a recreational drug, MDMA and its Ecstasy variants are often associated with the rave and EDM culture.

It is not surprising to learn that Ecstasy use is on the rise in Costa Rica. After all, MDMA users report enhanced feelings of empathy, closeness to others, reduced anxiety, and happiness; such feelings are compatible with the typical mindset of people in Costa Rica. The EDM scene has also grown in Costa Rica over the last few years; to wit: The Envision Festival, as well as various big-name DJs who come to spin sets their popular sets here. A tenet of the rave and EDM culture is PLUR, which stands for Peace, Love, Unity, Respect. Such as philosophy would be welcome not just in Costa Rica, but anywhere in the world.

Unfortunately, not everything is PLUR when it comes to Ecstasy in Costa Rica. This is a controlled substance that carries certain risks and presents ancillary challenges. The first issue is that, as a designer drug, Ecstasy is often subject to impure manufacturing -this means that users in Costa Rica hoping to score adequate doses of MDMA may end up getting bathtub-made amphetamine. “Getting burned” in this fashion entails a monetary loss, which at current retail street prices may fluctuate between $10 to $20, and it also means being subject to unknown substances and potential toxicity -a phenomenon known as “dirty pills.”

Tico MDMA users rely on the PLUR network to attest the purity of pills, which are often imprinted with designs such as cartoon characters (such as the Smurfs), brand logos (such as Mitsubishi years ago), stylized silhouettes (doves), and others. Going by these logos is not, of course, a reliable way of testing whether a pill is MDMA or not. Chemical reagent test kits and knowing the reputation of the source of the pills are preferred methods, which brings us to the issue of drug trafficking.

A recent article by Alvaro Sanchez of CRHoy reports on the recent dismantling of an Ecstasy smuggling ring in Costa Rica. According to the article, the Drug Control Police (Spanish initials: PCD) arrested an Italian man and two National Post Office workers suspected of participating a scheme that involved trading cocaine for high-quality Ecstasy pills manufactured in the Netherlands.

When the smuggling ring was broken up, the authorities in Costa Rica seized 11,109 pills and about a kilogram and a half of cocaine that was ready to be shipped to Europe. In a few European nations, purchasing the chemical ingredients needed to manufacture large quantities of MDMA is not as controlled as in the Americas. Dutch chemists are known to be knowledgeable and ethical when it comes to manufacturing MDMA, and thus their output is highly sought-after in the PLUR world. When it comes to Ecstasy, Dutch provenance is considered to be of the best quality and safety. Pills manufactured in Mexico or Canada, not so much.

That criminal organizations trade cocaine for Ecstasy in Costa Rica should not be a surprise. A 2003 report by the United States Drug Enforcement Agency (DEA) explained that:

Costa Rica is a transshipment and staging area for cocaine and South American heroin targeted for the United States as well as Europe. Drug traffickers use Costa Rica as a location to store and consolidate multi-hundred-kilogram cocaine shipments and to stage heroin shipments for smuggling.

Costa Rica will continue to be an attractive vacation location for Europeans and U.S. citizens who may contribute to local MDMA abuse.

The main issues with MDMA use in Costa Rica transcend its status as a controlled substance. Dirty pills pose obvious health risks based on the fact that substances unknown may be present in pill form, but even MDMA abuse can be a major concern.

Side effects of MDMA include hyperthermia, dehydration and tachycardia. The City of New York recently shut down the popular Electric Zoo EDM festival at Randall’s Island after two deaths and four people ending up in critical condition due to alleged use of Ecstasy. Concertgoers are blaming “a dirty batch of molly” on the unfortunate casualties, but there are also concerns of overdosing and adverse physical reactions.

The physiological side effects of Ecstasy can be quite strong, especially when combined with other drugs as described earlier in this article by Fernanda, the Tica molly user. Mixing MDMA with LSD is known as “candy-flipping;” mixing it with cocaine is often called “sugar-flipping.” Regardless of slang, these are very irresponsible practices, especially when considering the hyperthermia and dehydration already attributed to MDMA. Such behaviors do not fit into the PLUR doctrine, which actually supports moderation.