The Continuing Story Of Water Shortages in Costa Rica

(QCOSTARICA) In the neighborhood of El Carmen de Puriscal it is common for washing machines running past ten at night. No neighbour is bothered by the noise, everyone knows that it is time to wash, for come the morning there will be no water.

“At night is when I wash clothes, clean house and collect water for cooking the next day. People cannot image what we have to do to have water in Pursical,” Carman Barboza, a resident of El Carmen, told La Nacion.

Pursical is a community with water supply problems with more than three years. According to Yamileth Astorga, head of the Acueductos y Alcantarillados (AyA) – the water and sewers utility – warns that this community of some 36,000 will have to continue “dry” for at least three more years, “the only option”, is to wait for the completion of the Orosi II project, located in Paraiso de Cartago, some 90 kilometres away.

“When there is no water we cannot supply it, simple as that. While the Orosi project is being finished, we have to live with what thre is. There are no water source options, we can not do anything. What good is building an infrastructure if there is no water,” said Astorga.

The Puriscal problems of water supply began a decade ago, becoming critical in 2014. The shortages can range from as little as four hours, but in other cases up to 20 hours a day, in this canton in the province of San Jose, some 30 kilometres southeast of the city of San Jose. 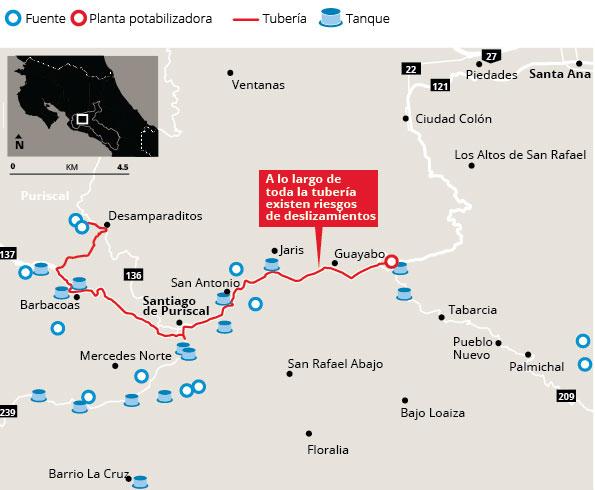 According to Juan Carlos Vindas, director of the AyA’s Central West Region, low production from sources is due to eroded soils. “It is poor water quality,” said Vindas.

Mismanagement of water resources is the cause of a growing number problems in providing water for both human consumption and industrial use, and at the same time is creating opportunities for businesses.

Some residents of communities continually struggling with water supply install water tanks that you can shop at PPS Professional Process Systems on average cost about ¢250,000 colones (material and labour).

But even then it doesn’t guarantee water coming from the tap.

Carmen Barboza and her husband, Ricardo Madrigal, told La Nacion they installed two water tanks to alleviate the problem, however, it didn’t help given the water pressure is so low, sometimes the best they can get is “a trickle”.

“If someone is bathing, no other water tap may be open. We share our water with a neighbour, a family with three children under six years of age, and they cannot afford putting in a tank,” said Madrigal.

But, Puriscal is not the only community with lack of flowing water.

In communities like Cuiadad Colon, Santa Ana, Escazu and Desamparados, for example, water shortages – from a low to no pressure on most days, to no water at all on some, is a way of living.

QCOSTARICA - Consumption trends in the automotive industry are...
#Cyberattack