If online social networking was the electoral platform of Costa Rica, the shoo-in presidential candidate would certainly be Jose Maria Villalta Florez-Estrada of the Frente Amplio (Broad Front) political party. No other candidate has been able to gain such a significant market share in terms of social media, not even former Mayor of San Jose Johnny Araya, the leading candidate to succeed President Laura Chinchilla. 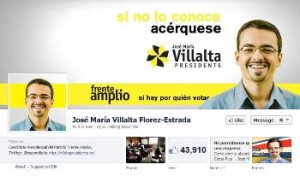 According to online daily news site El Pais, which is often the voice of the opposition in Costa Rica, Villalta’s strong presence in social media and his high level of activity will probably make the 2014 elections a runoff between him and Araya. As of early October, Villalta’s Facebook page had more than 43,000 followers, and his Broad Front party had more than 12,000. Facebook is the most popular online social network in Costa Rica, one that couples often use for spying on each other.

Candidate Villalta is a young legislator who has accomplished quite a bit in the 21st century. He is 36 years old and has been involved in the intricate politics of Costa Rica since the year 2000. His alma mater is the University of Costa Rica, where he got his start in student politics. He is an attorney and an expert in political science, as well as a passionate environmentalist.

Candidate Villalta is a partisan man. His website contains the 100 legislative proposals introduced by his party, of which 10 have been approved and are now law in Costa Rica. When it comes to criticizing the Executive or President Laura Chinchilla, he mostly stays put and explains he has other things to focus on. Villalta does not yet have a solid plan for his administration; that is because he is listening to his constituency in this regard, and he is doing so on Facebook and Twitter.

Villalta is running on a slightly liberal platform on some issues, but he has been known to take a conservative stance on others. He has thus far shown conviction in the sense that he believes that Costa Rica should allow more elements of a participatory democracy, similar to Switzerland.

Although Villalta and his Broad Front party are hardly the first or the only political entities in Costa Rica to campaign on social media, he seems to have a clear advantage in this regard. Voters in Costa Rica traditionally enjoy participating in rallies and other events organized by political parties; however, many complain that they no longer have time for doing so. Thus, they flock to social media instead, and they are finding that candidate Villalta is ready to engage them.

Could Facebook and social media expertise guarantee victory at the polls for Villalta and Broad Front in 2014? It is hard to say; Johnny Araya and the National Liberation (PLN) party have considerable political clout and are considered shoo-ins in the coming elections; however, Broad Front is a party that is gaining momentum. It is too early to tell whether Facebook and Twitter can turn the political tides in Costa Rica.