The Potholes Are Back And With A Vengeance 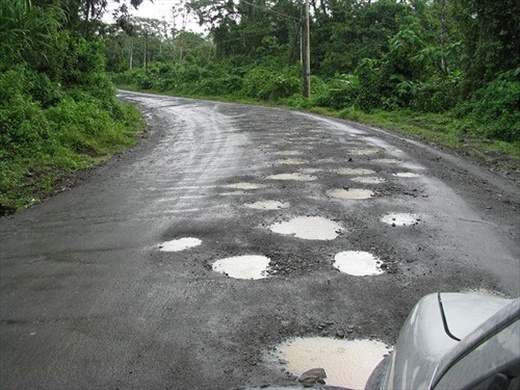 TICO BULL by Rico – There was a time, not long ago, Costa Rica was the ‘pothole’ capital of Central America. Heck, all of the Americas.

Those that know me personally, can remember the t-shirts I made, with a pothole warning sign in the front and the words, “I survived the potholes of Costa Rica” in the back, depicting the deplorable situation.

Things changed. I still have a few the t-shirts, other than the personal ones I still wear, when sales dried up, the potholes for the most were all gone. But, theyrrreeee back!

The video by Mario Pérez Pérez uploaded to his Facebook page on December 12 tells the tale of the pothole, he calls it a crater, on the Bernardo Soto, San José and San Ramón, in the area kwnon as ‘recta de los mangos’ in the San Ramon direction, and his counting 25 cars on the side of the road changing a tire.

I can related to that. Years ago, even before the t-shirts, in , coming back from Quepos, I ran upon a pothole on the old road, just north of San Mateo (Orotina) and flatted two tires on the same hole. How? Hit the front driver’s side, swerved to miss the rear, but missed, second flat.

Ahead of me, a few metres on the side of the road was another who had just hit the same pothole. In his case only one time. Riding with a friend behind, they were gracious enough to take one of my cut tires along with theirs, for repair.

It was now dark, maybe about 8 or 9, littel traffic at that hour. Two flat tires, one spare. If it hadn’t been for the two great guys I would have been stuck there for hours, maybe a transito or other police would come by with some help.

Back to today, the potholes are back. Besides not being able resolve the growing traffic congestion problem, the ministry of do nothing for nobody (MOPT), in its continued effort to make the country undriveable again, has done a good job of letting the potholes come back.

Just recently took a road trip to Nicaragua, half-way into the country, in the area of Matagalpa. And i can tell you in the more than 700 kilometres I drove in the neighbouring country I could count the number of potholes in one single hand.

On the Costa Rica side, save for the this year opened section of the Interamerican north between Cañas and Liberia and the Ruta 27 (a toll road), potholes are all over, some like the Bernardo Soto, the worst.

Want a glimpse of Costa Rica in days of old?