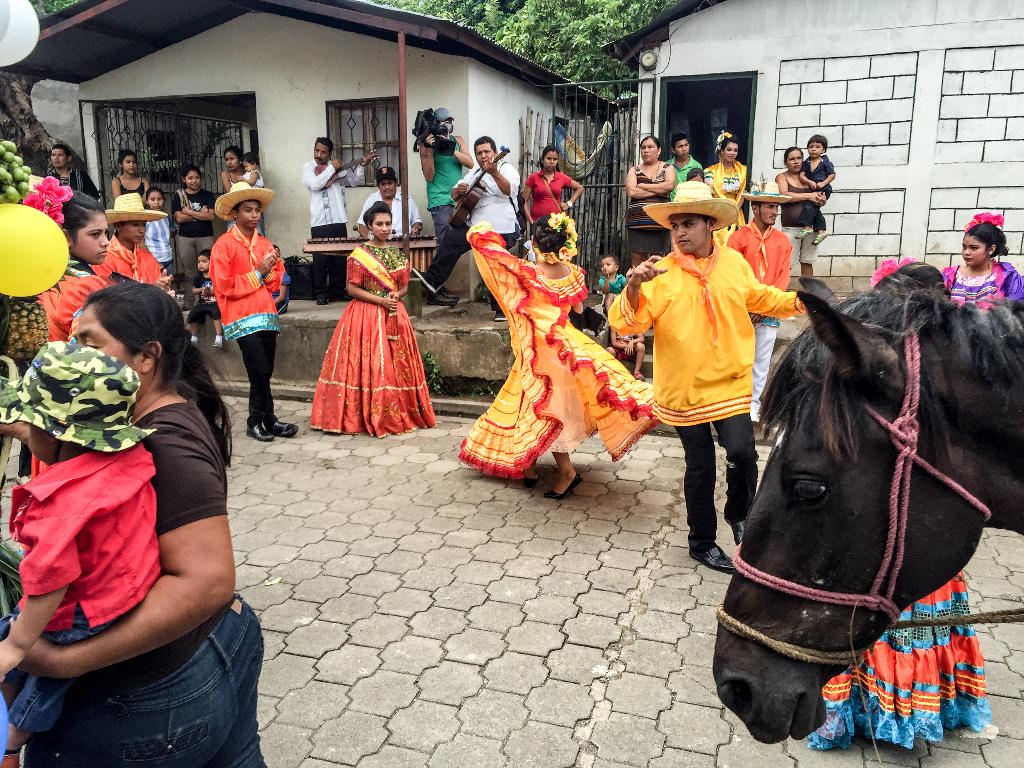 SAN JUAN DE ORIENTE, NICARAGUA — A rainy season cloud bulges out of the sky, about to spill, while sweat streams down my back. A thick crowd has appeared up the narrow cobblestone street. Suddenly, there is music, fireworks erupt and shouting teams of villagers, each carrying a heavy, hardwood tree trunk laden with coconuts, plantains and pineapples, are heading straight for me.

To avoid getting speared, I back up against the home of Juan Carlos Jimenez, a young ceramics artisan I met earlier this afternoon as I walked around San Juan de Oriente, to see how the people were preparing for their annual fiestas patronales to celebrate John the Baptist, the town’s patron saint. Another group crashes by with their fruit, accompanied by cheering crowds and two guys who are smoking cigarettes and using them to light crude rockets.

They are all heading to a giant log structure in front of the mayor’s house, where the teams lash ropes to their poles, then hoist their offerings 20 feet above the ground.

“This tradition is over 400 years old,” Jimenez tells me. “Children dance to the music from a very young age and they love it.”

“What about the fights?” I ask, referring to an unusual aspect of San Juan de Oriente’s fiestas that you won’t see elsewhere. “What about the chilillo fights?”

Jimenez laughs. “It’s all a sport, a tradition. We grow up with it.”

The fireworks leave the smell of gunpowder in the air. The brass chichero bands bang away. I’ve been traveling to Nicaragua since 1998, but I am witnessing something I have never seen before, which happens to me time and again. It’s one of the reasons I keep returning.

San Juan de Oriente is one of Los Pueblos Blancos, as people refer to the dozen or so villages that dot the volcanic hills to the south and west of Masaya. They’re called “the white villages” for both the color of their churches and the purity of their young women. I once lived with a family in this area, in a village just up the road called Pio XII, where Peace Corps assigned me as part of my community-based training. It’s about an hour south of Managua and the international airport, and 30 minutes from Granada, the beautiful colonial city where most tourists to Nicaragua base their travels. I’ve visited before, usually to buy pottery. But I’ve never been here during the last week of June, when San Juaneños drop everything to honor St. John the Baptist.

As we step back onto the street, somebody asks if I’d like a nacatamal, the traditional Nicaraguan dish of corn masa, lard, meat and vegetables, wrapped in a banana leaf, boiled and shared during festival time. In a few moments, a plate appears and I am unwrapping my nacatamal like the precious gift that it is. This is familiar — this raw hospitality that one learns to accept. This is the Nicaragua I’ve known since first traveling here in 1998.

Nicaragua’s tourism industry is growing. Now, in addition to $10-a-night budget hostels, there is an ever-growing selection of mid-range converted colonial homes and beach bungalows for rent, as well as a small but evolving high-end luxury scene. But you’ll still get raised eyebrows from your friends when you tell them you’re heading here — and you’ll still see the occasional U.S. Department of State travel alert (the current one is set to expire after Nicaragua’s presidential elections in November). Nicaragua has that edge in the eyes of the world, and its unpredictable politics and rule-changing leaders keep it in that exciting, slightly uncertain space.

There is no talk of politics on this fiesta day. Down the street, the shouting becomes louder and I see several hands waving floppy sticks in the air. “The chinegros are going to fight!” someone shouts.

A few hours earlier, I was sitting with Jimenez as he put the final touches on his chilillo (pronounced ChihLEEyo), a whip-like sword made of stiff leather … from a specific body part from a bull. “The picha del toro — that is a common word for bull penis — is stretched and cured, sometimes for 12 to 18 months,” Jimenez says. Now it’s time to fight with it.

As I approach, the crowd has already pushed back into a circle and the fighters are squaring off. The first blow comes quickly, and the crowd cheers. The chinegros take turns, whip for whip, and just when they seem ready to grapple, their friends rush in and the swords are lowered. The fighters give a chest-bump/man-hug, everybody bounces together, then the fighters are plied with shots of guaro, a clear liquor, out of old plastic soda bottles.

The fights are part performance, part ritual, part cultural dance, part blowing-off-of-steam and part raw brutality. The whole thing culminates in the street in front of the Catholic church steps, where St. John is placed to look out over the fireworks and fighting.

The next day, I choose a more familiar destination. Or so I think — I’ve been to Masaya Volcano National Park at least a dozen times. I’d heard that recently, seismic activity beneath Volcán Masaya had created a larger, more active lava pool.

I step up to the stone fence and remember that the scene never fails to astound me. It’s what I imagine Mordor must look like, all black rock, poisonous sulphur plumes, and dark clouds in the sky. But my eyes are drawn downward. Where once there was just a hint of orange behind a bank of rocks is now a bubbling, fiery stew, where molten rock heaves and spits and hisses.

I make the same drawn-out “whoaaa” sounds as the other visitors lined up along the rock fence. Once again, I’m witnessing something I’ve never seen before in a country I thought I knew. And as sure as Juan Carlos and his family will keep his small-town traditions alive, I’ll keep coming back—for at least another 18 years—to visit my friends and to see what else I can learn.