From TICO BULL – While taking my regular early morning walk around the La Sabana park I noticed a strange scene, a guy standing upright moving, gliding, along the sidewalk to the bus stop on what appeared to be a unicycle. But, there were no pedals, no seat, just a guy balancing himself on a wheel, moving along without any effort at all.

Ricardo Morales told me all about his wheel which he had bought about a year ago and now finds indispensable as a personal transportation device.

Unlike a bicycle, the SOLOWHEEL, can be taken on a bus, to work, anywhere really, it doesn’t take up much space and has a built in carrying handle.

According to Ricardo, he gets up to 10 kilometres on a single charge, depending on the hills and weight. His typical ride is about 4 kms daily: 2 kms in the morning from his house to the bus stop in La Sabana and 2 kms back in the afternoon.

Working in Santa Ana, well within the range of the SOLOWHEEL, Ricardo told me the device is made for use on sidewalks and we all know “there is no sidewalk” from La Sabana to Santa Ana.

Ricardo said he bought his SOLOWHEEL about a year ago, paying about US$800, “the cost of a high end bicycle”.

Using your body, you can move forward, slow down, speed up and stop.

The price today, from the Solo Wheel website, is US$1.790. However, you can buy used on Amazon for half of that.  For now the SOLOWHEEL is only available for puchase online. 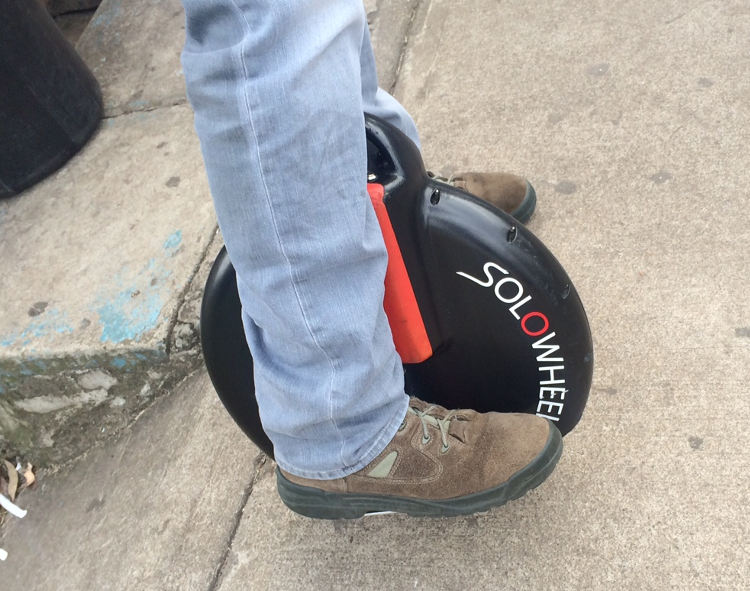 What is a SOLOWHEEL? According to Investist.com, the SOLOWHEEL is the smallest, greenest, most convenient “People Mover” ever invented. This gyro-stabilized electric unicycle is compact and fun to ride and is intended to be used as you would use an electric bicycle.

This article is NOT an advertising spot for SOLOWHEEL. But if you decide to purchase one through Amazon, please use this link, let me earn the small commission to buy a cup of coffee.