These are the new EXCESSIVE tolls in Alajuela and Naranjo

Starting Monday, November 9, the toll at the Alajuela toll station (pictured above), will go from ¢75 to ¢275 passenger vehicles and motorcycles; at Naranjo from ¢150 to ¢525, to finance the expansion of the route between San José and San Ramón

By Rico
5 November 2020
Paying the bills

QCOSTARICA – Starting Monday, November 9, new rates will apply to tolls in Alajuela and Naranjo that are part of the San José-San Ramón road corridor.

The Rio Segunto tolls apply only to vehicles traveling in San José-Alajuela direction.

These tolls are administered by the Ruta Uno Trust, which is in charge of the San José and San Ramón expansion project. 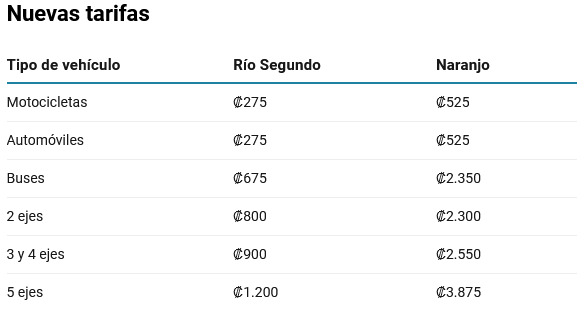 The new rate structure was approved by the Public Services Regulatory Authority (Aresep), after authorities alleged the need to update the tolls to finance the works planned on that route.

“The toll rates that were in effect for almost two decades were calculated to cover only the investments associated with the rehabilitation and conservation of the existing highway, as well as operating and administrative expenses.

“In other words, there was no possibility of generating sufficient resources to cover the investments that are programmed for the pre-investment phase of the project,” explained engineer Hadda Muñoz, project director of the Ruta Uno Trust.

These investments have to do with expropriations, resettlements and relocation of public services, among other activities, to which the construction, equipping, operation and maintenance of the 55-kilometer highway corridor will be added later.

Muñoz indicated that the current collection generated by tolls does not allow to face the approved physical and financial planning, since there is an important limitation of funds that, according to added, has been aggravated by the crisis generated by the COVID-19.

“The resources that will be collected with the implementation of the new tariff structure are essential to obtain the loan that the Ruta Uno Trust must manage (bankability) to obtain resources destined to meet the operational, administrative and investment expenses of the comprehensive expansion project of the highway between San José and San Ramón,” added Pedro Zamora, supervisor of Investment Banking at the BCR, responsible for financial structuring of the project.

QCOSTARICA - After two days of virtually no rain...
Lifestyle