This Only The Beginning of “Street Democracy”, Says Union Leader 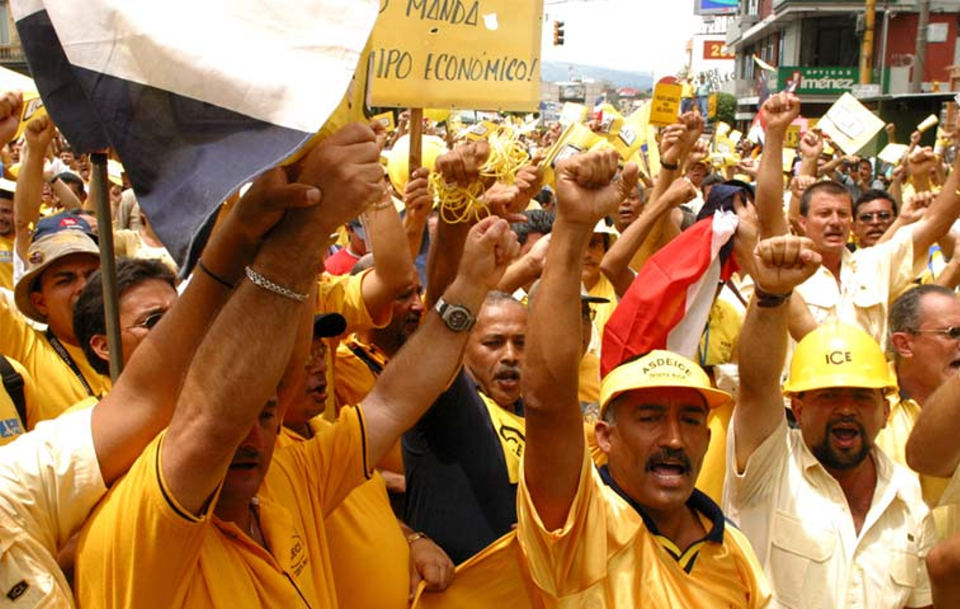 (qCOSTARICA) – Workers belonging to two of the country’s largest public sector unions, the Frente Interno de Trabajadores del Instituto Costarricense de Electricidad (FIT) and the Asociación Nacional de Empleados Públicos y Privados (ANEP), took to the streets on Monday, demanding a stop to the publication of the “gross salaries”, making it clear they will reject any attempt to reform wages.

This includes bills to promote the establishment of a single salary in the public sector or to reorder bonuses or additional pay.

The presidents of the ICE union and ANEP, Fabio Chaves and Albino Vargas, respectively, met with the president of the Legislative Assembly, Rafael Ortiz, for some 40 minutes on Monday, while the workers marched in the streets of downtown San Jose in protest.

Among the legislators taking part in the meeting were Mario Redondo fo the Alianza Demócrata Cristiana; Johnny Leiva, head of the Unidad Social cristiana (PUSC), and Otto Guevara, leader of the Movimiento Libertario and responsible for the publication of the high salaries paid to civil servants at some key institutions like the ICE, Recope and Universidad de Costa Rica (UCR).

“We came with a show of force for the right of the county you represent. We came to show that we have the strength to face them (…)”, were the words of Chaves, considered to be the first warnings.

With a consensus, Vargas said they will again take to the streets if legislators continue their “smear campaign” on public salaries.

According to Vargas, Monday’s march was only the beginning of “street democracy”, the next will be “broader” and on a “national” level.

The ICE workers gathered in front of the institution’s headquarters in La Sabana, moving along Paseo Colon and Avenida Segunda, where they met up with ANEP workers, together ending their march in front of the Legislative Assembly.

The march was uneventful.

Perhaps the most comical of the day was the need for Albino Vargas to be surrounded by private security.  The union leader moving at all times with four bodyguards, telling the press that he had received death threats.

On explanation, Vargas said two comments had been posted on the social media (Facebook), one saying he won’t last long (will be dead) if he continues and the second, “why is he still alive?”. From the photos and video footage, however, the security detail allowed the “security ring” to be broken on numerous occasions as the union leader mingled among the people.

- Advertisement -
Paying the bills
Previous articlePork Production in Costa Rica Up 2%, Price Down 28%
Next articleTaxi Drivers Will Take To The Streets On Wednesday