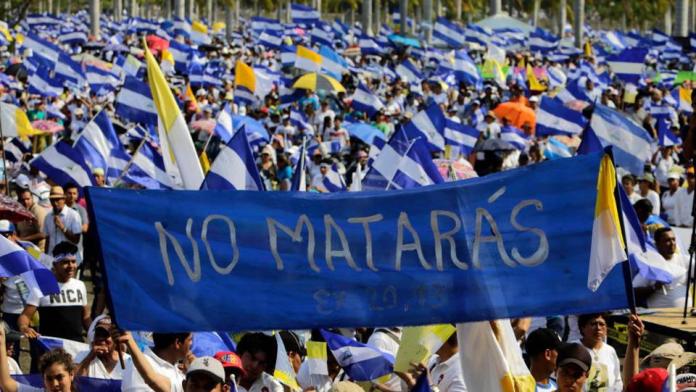 Thousands in Nicaraguans marched through the capital Managua on Saturday in a mass demonstration to demand justice following a wave of protests and violence for more than 10 days, that an unofficial toll of more than 62 people dead.

During the rally organized by the Catholic Church of Nicaragua, Managua’s Archbishop, Leopoldo José Brenes Solórzano, issued a deadline of one month for the national dialogue aimed at resolving the issues facing the country’s worst unrest in 11 years, to see “if a real commitment exists.”

The peace and justice march is part of the broader anti-government protests across the country that began on Wednesday, April 18, when the population protested against pension reforms.

On Friday, university students, who have been at the forefront of anti-government unrest, issued conditions for talks with the government President Daniel Ortega.

Joining the students were private sector workers and others, among them young people, the elderly and farmers. There was a sea of blue and white flags as the crowds massed outside the city’s cathedral.

“We have come on a pilgrimage as one people, brothers in the faith of the Lord Jesus, brothers in suffering for so many lives lost… desiring justice, peace and reconciliation,” Brenes told the crowds.

Brenes said he would act as a witness and mediator in the dialogue called for by Ortega.

“If we see that they are not taking these steps, we will call a halt and we will tell the people of God that we cannot carry on,” he said to widespread applause and chants of “Make them go!” in reference to Ortega and his wife, Vice President Rosario Murillo.

“We are no longer afraid, we want a free Nicaragua. Nicaragua wants peace so that there is no more bloodshed. There has to be justice for the dead and the disappeared,” was the common thread of many attending the march.

The current #Nicaragua political crisis, decades in the making, calls for a Nicaraguan solution led by the Nicaraguan people, not outside actors such as the @OAS_official or @UN or regional “working groups”. Nicaraguans know best what is in the best interests of their country. pic.twitter.com/yw2rFWhCSS

Although Ortega has agreed to hold talks, the framework has yet to be defined.

The students, on the other hand, have laid down their conditions for the dialogue to take place, among them, demanding the dismissal of police involved in the repression, the establishment of an independent UN-backed body to investigate the violence, that the talks be held in public and that the relatives of those killed be involved.

- Advertisement -
Paying the bills
Previous articleTuesday, May 1, Is A National Holiday in Costa Rica!
Next articleNicaragua’s Unfinished Revolution Takes A New Turn