Thursday’s Protest Lacked The Support Of All Public Workers Unions 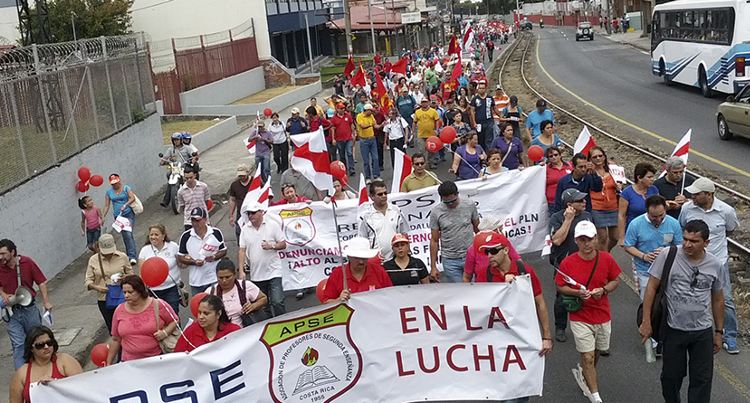 The protest on Thursday had little impact on public health services. The greatest impact was reported in schools and on traffic.

According to the Caja Costarricense del Seguro Social (CCSS) only one percent (1.104 people) of its employees joined the protests and that of the 13.125 medical appointments for the day, only 336 were cancelled, and only 35 of the 167 elective surgeries were rescheduled.

Though the Ministerio de Educación Público (MEP) – Public Education Ministry – would not quantify the impact of the strike on the public schools, the Asociación de Profesores de Segunda Enseñanza (APSE) and the Asociación Nacional de Educadores (ANDE) unions say some 90% of all public schools were affected.

The division between the unions involved in the protest and the Asociación Nacional de Empleados Públicos y Privados (ANEP) – which was absent from the protest – decimated Thursday’s strike.

The protest march began at 8:30am in front of Casa Presidencial, in Zapote, and by 11:45am protests took place in many parts of the country. The biggest show of support was in San José, where protestors blocked the autopista General Cañas, Paseo Colon, and other areas. The protest also caused tremendous congestion in the area of the international airport.

The public workers are unhappy with the way the Chinchilla government in the handling of wage increases. The unions are demanding the government establish a new formula for increments and salary adjustments.