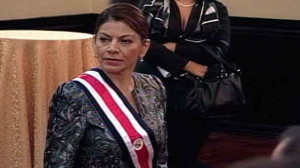 Due to the expectation of increased protests today, the Presidenta’s security will be tightened while she attends the celebration of Juan Santamaría Day in Alajuela Centre.

The celebration marks 157th anniversary remembering the heroic deeds of Juan Santamara in the Battle of Rivas that took place in Nicaragua on April 11, 1856.

Protests against the San José-San Ramón road have been announced, as residents of several Alajuela province communities are planning to give the Presidenta “the shoulder”.

The increased security is to avoid Presidenta Laura Chinchilla being exposed to any violent and/or confrontational situations that may arise.

The city of Alajuela also, though not necessarily related to the Presidenta’s security tightening, announced that the city Alajuela (not the province) will be dry. The objective of the measure is to maintain order during the celebrations.

In addition, the city of Alajuela said additional police units will be on hand to ensure order during the parade.

QCOSTARICA - The dreaded increase has been announced for April. The regulatory authority approved what is the fourth consecutive increase since the beginning of...
Farandula

Q MAGAZINE - Former model and television presenter Pamela Méndez was clear and direct to a follower who asked her if she was a...
National

QCOSTARICA - In order to continue ensuring the public interest by assessing the impact that government institutions have experienced as a result of the...
Economic Recovery

QCOSTARICA - "It felt like an earthquake," described Eduardo Retana, the driver of the pickup truck that had the unfortunate luck shortly after noon...
Bureaucracy

QCOSTARICA - A new roadblock faces the construction of the Circunvalación Norte of the Ruta 39, the San José north ring road, as from...
Pura Vida

TODAY COSTA RICA - Neither the coronavirus nor the global confinement managed to prevent the renowned naturalist, Sir David Attenborough, from filming in our...
Argentina

Q24N (Buenos Aires) Nighttime driving will be prohibited in Argentina as of this Friday and for three weeks, a measure that is applied for...