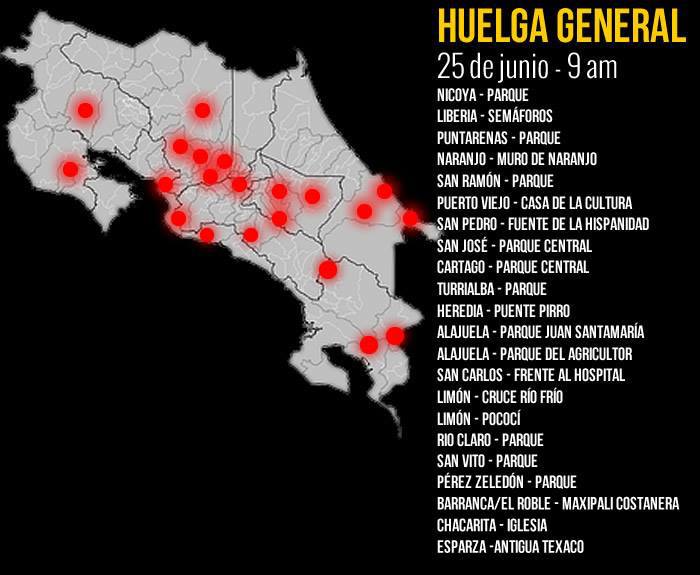 If you can avoid downtown San José tomorrow, best do so. The city will be a madhouse, as Avenidas and Calles will be jammed with social groups and union workers who have declared June 25 a national strike day.

The reasons for the protests are varied. Some will be out protesting the San José – San Ramón road concession, others the dock terminal and refinery in Limón.

Add to that gas stations are threatening to stop taking plastic (credit and debit card) for payment and a complete shut down on Wednesday, if the regulating authority doesn’t meet their ultimatum that expires today.

Public sector workers, with tens of thousands of members, will be the centre of the protests. Public sector unions are calling on their membership to gather in front of the Fuente de la Hispanidad (fountain) in front of Mall San Pedro.

Others are expected to amass on the west side, the La Sabana, with both sides converging onto the Legislative Assembly in the middle.

Protests, marches, blockades by teachers, students, general public sector workers – event bikers of the National Bikers, will be joining in the protests.

Although the main stage is San José, protests are expected in major centres across the country.

The president of the Asociación de Profesores de Segunda Enseñanza (APSE), one of the largest public sector unions, Beatriz Ferreto, is asking parents to keep their children home from school on Tuesday.

“Tomorrow there are no classes because all the teachers will be on strike”, Ferreto told ADN 90.7 FM radio Monday morning.

Although the Asociación Nacional de Empleados Públicos (ANEP) has said it will sit out the protest marches, it is expected that ANEP teachers will not be in the classroom.

QCOSTARICA - With the intention of protecting minors, a...
News