Not qualifying in 2010, Costa Rica’s national soccer team, “La Selección” or “La Sele” is getting ready to head out for Brazil next month, in their overall fourth time in Wold Cup play.

Having lost all three first round games in 2006, La Sele looks to go further in this time around. But the road is rough, they face powerhouses like Italy and England. And then there’s Uruguay.

Accoding to SportsMole, it would be a remarkable feat if they are able to improve upon that record this summer. And have prepared a list of the top ten Costa Rica players in the history of the Ticos.

A solid and uncompromising centre-back, Luis Marin enjoyed great success at club level in addition to playing a major role in one of the best periods in Costa Rica’s history. His mammoth total of 130 caps puts him second in the all-time appearances list, while his 16-year career saw him take in two World Cups.

He started every match for Costa Rica in both the 2002 and 2006 tournaments, and will feature again this summer in Brazil as the national team’s assistant manager.

At club level he spent most of his time with LD Alajuelense, where he won eight Costa Rican championships, three Copa Interclubes UNCAF titles and the CONCACAF Champions’ Cup.

Considered one of the national team’s greatest ever captains, Mario Cordero led both Costa Rica and club side Deportivo Saprissa to great effect throughout the 1950s and into the 1960s.

The defender, better known as ‘Catato’ was renowned for his sportsmanship both on and off the field, but that didn’t take away from his winning edge. He led Saprissa to four national titles as well as taking them on a world tour in 1959 – the first Latin American team to embark on such a trip.

After retiring, Cordero found even more success as a manager, guiding Saprissa to a further four league titles as well and taking charge of the national team.

While Derby County fans may remember Mauricio Solis from his short and rather unsuccessful stint at Pride Park in the 1990s, the defensive midfielder was a fixture of the national side for 13 years, helping them to one of the most successful eras in their history.

Solis featured at the 2002 and 2006 World Cups, starting every match for Costa Rica in both tournaments before his 110-cap international career ended after Los Ticos were eliminated in Germany.

Something of a journeyman at club level, Solis still managed to acquire four Costa Rican championships, including three in the space of just five years at the start of this century. 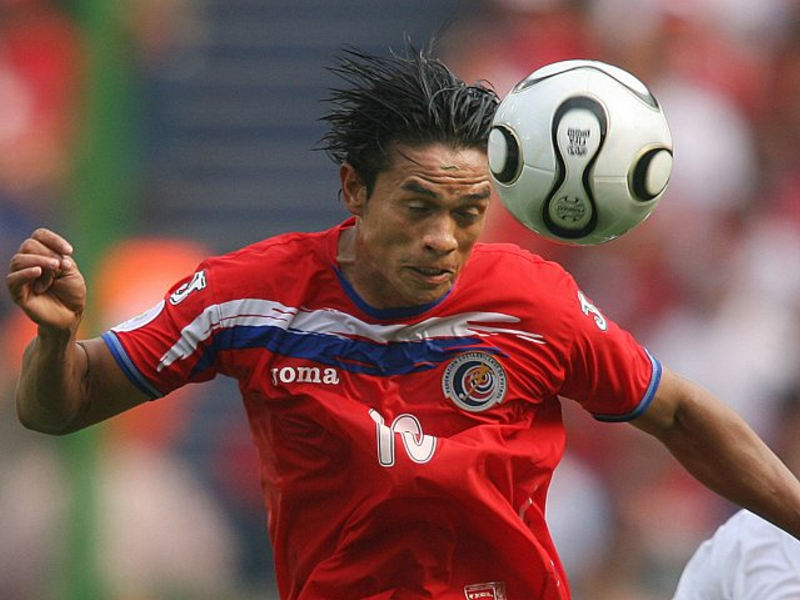 With a huge 137 caps to his name, nobody has turned out more often for Costa Rica than Walter Centeno. His 15-year international career saw Los Ticos qualify for two World Cups, while he also helped them to three UNCAF Nations Cup crowns and a runners-up performance in the Gold Cup.

The attacking midfielder spent most of his club career with Deportivo Saprissa, where he won no fewer than 10 Costa Rican championships, two Copa Interclubes UNCAF titles and the 2005 CONCACAF Champions’ Cup. He also helped them to third place in the FIFA Club World Championships that year, where they were beaten by Liverpool in the semi-finals.

Centeno spent a short but notable stint with AEK Athens, appearing for the Greek side in the Champions League and managing to score at both the Santiago Bernabeu and the Stadio Olimpico as Real Madrid and Roma were held to home draws.

Had it not been for a horrific broken leg in 1971, Errol Daniels would have surely added to his tally of 19 caps and eight goals with little trouble. The striker saw his career effectively ended at the age of just 26 when he collided with the goalkeeper of Barrio Mexico, fracturing his right leg to put him out for more than a year.

While he did return to action, he never fully recovered and was forced to retire at just 28, bringing a premature end to an incredibly promising career. Renowned for his speed off the mark and a powerful shot, Daniels was regarded as the great hope of Costa Rican football having swept all before him at club level.

His 197 goals for LD Alajuelense came in just 168 matches and is the highest tally in the history of the Costa Rican league – a feat Daniels managed to achieve in just eight years. He picked up the national championship three times and also holds the joint-record for number of goals in a single season, notching 41 in the 1967 campaign.

Goalkeepers from the Americas all seem to have a flair for the spectacular, and Luis Gabelo Conejo was no different. Bursting onto the scene at the 1990 World Cup, Conejo captured the imagination with a string of sensational saves against the likes of Brazil, Scotland and Sweden.

His performances led to him being named in the team of the tournament as Costa Rica surprised everyone by qualifying from the group stages in their first appearance at the finals, although he missed the last-16 defeat to Czechoslovakia through injury.

IFFHS named him the 34th best goalkeeper in the world between 1987 and 2008, and he will once again grace the biggest stage this summer as part of the national team’s coaching setup.

A fixture of the Costa Rican side for almost two decades, Rolando Fonseca is the country’s highest ever goalscorer having notched 47 times in his 113 international appearances.

The diminutive striker featured for Los Ticos in the 2002 World Cup in Japan and South Korea but was controversially left out of the squad four years later for Costa Rica’s ill-fated campaign in Germany.

As one of the most creative players in the history of the Costa Rican national side, Ronald Gomez played a major role in helping the team to back-to-back World Cup tournaments. He featured in both the 2002 and 2006 editions on his way to 91 appearances for Los Ticos.

The well-travelled Gomez played for clubs in seven different countries throughout his career, including a brief stint in Spain with Sporting Gijon and Hercules. It was in his native Costa Rica that he enjoyed most success, however, winning three national championships, the Copa Interclubes UNCAF and the CONCACAF Champions’ Cup.

Gomez was also involved in Deportivo Saprissa’s Club World Cup campaign in 2005, clinching a third-place finish for his side with a fine strike against Al-Ittihad having been knocked out by Liverpool in the semi-finals.

English fans will remember Paulo Wanchope well from his eight-year stint in the Premier League with Derby County, West Ham United and Manchester City. A memorable goal against Manchester United on his debut in English football did much to endear him to Derby fans in particular as he beat four players before sliding his finish past Peter Schmeichel for a strike that was later voted the best in the club’s history.

He was even more revered at international level, where he posted a remarkable goals-per-game ratio by notching 45 times in 73 games. He is second only to Rolando Fonseca in the all-time goalscoring charts for Costa Rica, while his haul includes strikes against Brazil and Germany in the 2002 and 2006 World Cups respectively.

Having suffered with a knee injury for much of his career, Wanchope eventually retired in 2008, although he will be on the sidelines for Los Ticos in Brazil this summer as he travels as the team’s assistant manager.

While many of the players on this list have enjoyed great success domestically, Alejandro Morera is perhaps the only one in Costa Rica’s history to have established himself as one of the finest players in European football.

The diminutive striker caught the attention with a prolific spell at LD Alajuelense in the 1920s and early 1930s, earning him a move to Spanish giants Barcelona in 1933. There, he scored 63 goals in just 76 matches for the Catalan club, leading to the press dubbing him “The Costa Rican phenomenon”.

Having scored 41 goals in his first full season with Barcelona, Morera was forced back to Costa Rica after just two years due to the Spanish Civil War. He enjoyed more success back in his homeland with three further titles to add to the one he won before he left, including helping Alajuelense to an undefeated campaign in 1941.

With files from Sports Mole UK