Traffic Cameras Back Next Month!

It is expected that the traffic cameras will back working on the main highways around San José as early as in a week or more, this given that staff of the Radiográfica Costarricense (Racsa) have been fining tuning the camera equipment and operating system. 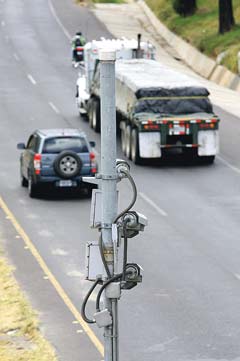 In fact, Racsa spokesperson, Mario Zaragoza, confirmed that the cameras are operational but that the information on speeding drivers is not yet being passed on to the Policia de Tránsito.

The nod for the cameras to begin fining speeders is awaiting the decision by the Consejo de Seguridad Vial (Cosevi) board of directors. That decision could come in a couple of days.

The decision to use Racsa is a logical one, according to the Ministro de Transportes (MOPT), Pedro Castro. Racsa being a state agency eliminates the process of bidding that would be required if the contract were to go to a private company, explained Castro.

Zaragoza confirmed that Racsa technicians have been busy tuning the equipment and that the cameras are working.

If you will recall the cameras were installed at five different locations across the greater metropolitan area of San José, mainly on the “autopistas” (highways), to catch drivers who go over the posted speed limit.

More than 20.000 drivers were picked off by the cameras in the little over a month of operation back in 2011, when due to legal problems the operation had to be scrapped.

The main problem was the notification of offending drivers. The publication of license plates of vehicles picked off by the cameras became controversial.

This time around, with the new traffic law that went into force on October 2012, all vehicle owners are required to provide the Cosevi with contact information*, information that is then used to “legally” notify the owner of the vehicle.

The 2012 law also allows that the owner of a vehicle who was not driving his or her vehicle at the time of the infraction to point the responsibility to the person actually driving the vehicle at the time, ie if the car was lent to a friend, an employee or in the case of car rental agencies, the renter.

Once the cameras start rolling (pun intended) the owner of the offending vehicle will be notified by email. The owner of the vehicle will then have to pay up or appeal the ticket. Failing the amount of the fine, plus costs, will be added to the annual circulation permit or Marchamo as it is known in Costa Rica.

*The October 2012 traffic law requires every driver to register their contact (notification) information. Failure to do so does not negate the responsibility to pay the fine.