It was almost two years ago (September 2011) that the traffic cameras went dark, after the Consejo de Seguridad Vial (Cosevi) found it could not “legally” notify speeding drivers. 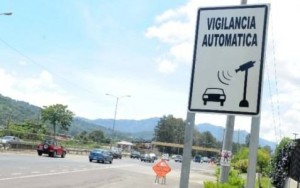 ince there have been several attempts to revive the program, the latest involving a proposal with the autonomous state agency, the Radiográfica Costarricense (Racsa).

The traffic camera program involves installing a series of video radar cameras at strategic locations along the major highways, mainly in the greater metropolitan area of San José.  With the reforms to the traffic law last year, the COSEVI now has the “legal” tool to notify speeding drivers picked off by the cameras.

The Racsa proposal is simple, Racsa would install and maintain the cameras and notify drivers of their infraction.  The cost to Cosevi is US$5.500 dollars per month. The proposal calls for the installation of 150 cameras, for a monthly cost of US$825.000 dollars to Cosevi, which would keep 100% of the the fines collected.

Carlos Rivas, legal advisor to the Cosevi, explained that the roads council rejected the Racsa proposal for being too costly. Rivas explained that it would be “unsustainable” for the Cosevi to pay that amount each month.

The Racsa proposal is quite different than the deal signed in 2011 where Racsa would retain 70% of all traffic fines collected from the traffic cameras, the Cosevi would be left with the balance.

That deal was terminated in 2011 by mutual accord when Cosevi suspended the program, unable to legally collect on the fines during the six weeks of operation that saw more than 15.000 vehicles picked off by the cameras. Some 3.000 drivers “did the right thing” by paying their fines on time, the balance did not and the tickets were nulled.

Despite the latest setback, the Cosevi says it plans to have the cameras working in 2014.