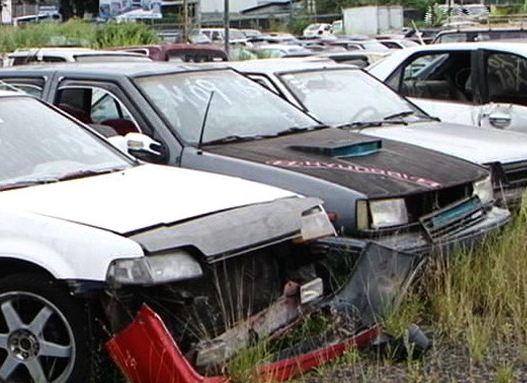 The government this week donated 217 derelict cars to charity. They will be sold as junk by the Espiritu Santo Association to fund their good works. Still, that is just a tiny slice of the staggering number of cars and broken motorcycles that glut the yards.

For example, the paper reported that the Cartago MOPT headquarters has a yard crammed with 1,025 cars while Pavas has more than 4,255 motorcycles. In el INVU at Cañas, 400 cars and another 4,000 cycles are rusting away.

They are victims of accidents or confiscations where either they are total losses due to damage and the owners either couldn’t afford to repair them; or the fines accumulated were so high the vehicles were worth less than the fines.

MOPT’s second in command of the administration division, Alejandro Piedra, told the paper that it was decided to donate the vehicles to charity at the request of the Health Ministry. “The high possibility that they were breeding places for dengue mosquitos …obliged us to clean up these yards,” Piedra explained.

But the job is a big one. MOPT’s Luis Fernando Carvajal estimated that it could take up to eight years to get rid of all of them, due to the tedious paparwork needed to convert them into donate-able material. Carvajal confessed that he has some 600 authorizations on his desk, prepared for Cartago alone.

If a car is confiscated — except in cases of drug traffic, in which case they become the government’s property — the owner has three months to recover it. Longer than three months, the vehicles become lost in a tangled jungle of rusting metal as more car are added to the mess.

It appears that for the next decade or so, one of this country’s minor exports will be scrap metal. But it is a windfall for charitable institutions.