QCOSTARICA – The most affected by the sanctions imposed on the two Costa Rica bus operators by Nicaragua’s Ministry of Transportation and Infrastructure (MTI) are the passengers, the majority of which are Nicaraguans headed to their home country for the holidays. 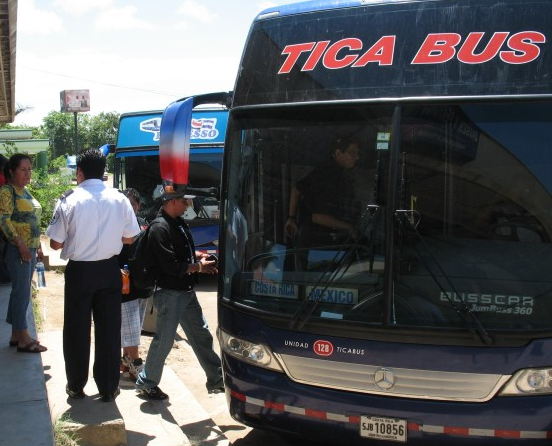 This afternoon, many expressed anxiety after learning of the news, fearing that they won’t be able to book passage for the traditional holiday travel. The anxiety is heightened by the fact that many travellers wait to use their aguinaldo (Christmas bonus) to buy tickets. (Employers in Costa Rica have up to December 20 to pay the aguinaldo).

On Monday, the Nicaraguan government announced sanction  against Transnica and Tica Bus, whose daily trips to Nicaragua from Costa Rica is limited to two, for the next 30 days.  The Nicaraguan bus operators, Central Line and Nica Express, aren’t affected.

Normally during the third week of December to the first week of January, Tica Bus and Transnica add additional buses to the meet the demands of the season. This year that will not be happening.

This is not a question of price, bus fares to and from Nicaragua are regulated.

José Adán Aguerri, president of the Consejo Superior de la Empresa Privada (Cosep), told La Prensa in Nicaragua, that “if the situation is not resolved in the next four days, the impact will be significant.”

La Prensa says that the sanction will surely affect tourism in Nicaraguga. According to the Nicaraguan Tourism Board (Intur), the country saw 50.825 tourist arrivals at land borders with Costa Rica during the 2103 holiday season.

Today, Saturday, June 19, only vehicles with "ODD" ending plates CAN circulate The measure is countrywide and applied between 5:00 am and 9:00 pm, save...
HQ