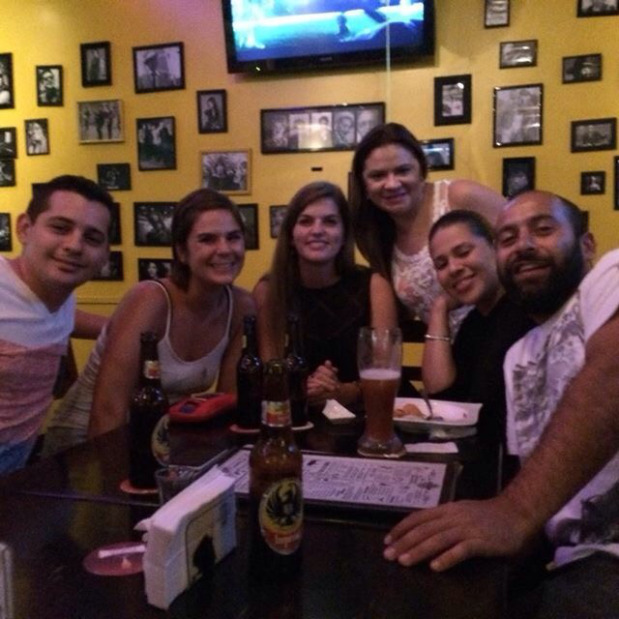 She nods her head yes. So I relax, as much as one can in a crowded bus driving through a very poor area in a city where no one speaks English.

Please do not read this as a complaint, I am loving my adventures and a visitor, so trying to be as polite and respectful as I can be. It seems that a lot of Ticos get frustrated with gringos who come to CR and do not even attempt Spanish.

They really appreciate an effort, even if it is the completely wrong words.Anyway, so the bus drives straight past a sign that points left to Escazu, so I ask the woman again. Yes, we are going there she nods. She probably thinks RELAX haha. Eventually we get to the multiplaza, which is a huge shopping mall that looks a lot like King of Prussia (PA people), very clean and bright. It is three stories and filled with a lot of stores that I recognize like Victoria Secret, Gap and Express. I find the Apple Store fairly quickly considering the size of the mall. The store is probably half the size of the

Apple Store at home and has only four or five people working that I see. I get in line at the service section behind three other people. Once I reach the desk, I ask if he speaks English and he says yes (whew, relief). He writes up a slip for it and says they will look at it probably Wednesday. I give him the contact information and the case number for my hopeful warranty coverage. He said that they do warranty work with the U.S. all the time, so I feel fairly confident that IF apple covers it, it will be easy to get it dealt with here. So that was a semi relief.

I stayed at Apple for a little while afterwards using their wifi, letting my parents know that I got to San Jose and Apple safely. I also FB messaged Sarah to see when and where she wanted to meet. She said the exit by Victoria Secret. So, I left the wifi and found a tiny VS, one that only sells sprays and what not.

They said it is the only VS in the mall. I saw a McDonald’s on the lower level under VS that has wifi so I went there and messaged Sarah to make sure it was the right VS. She said it was an outdoor exit but this one went into a car port, so it wasn’t right. No big deal, she will meet me at McDonald’s. Well, twenty minutes later, we are both at McDonald’s and cannot find each other. There are two. Eventually we figure this out and she finds me.

We climb into her car and head for their home. This is the first time I have been in a car for a long time, probably since I was in the U.S. The driving in CR is much more agressive and chaotic here. People pass each other and cut each other off constantly, it is normal.

There is no way I would feel comfortable driving.We arrive at their home which is lovely, very open and airy. There are three levels, a nice little backyard and a garage in the front. The garage has a wrought iron gate instead of a door, so it allows a nice breeze to flow through the first floor. She shows me my room and bathroom, which are very nice.

I take a HOT shower, a nice surprise! The cold showers have been fine, but San Jose is significantly cooler than Samara so the warmth felt good. Not to mention I needed the extra sterilization after my excursion. Javier and their friend Willy were there so we all hung out for awhile. They invited me to go to a friends birthday party that evening. It was going to be held at a local bar/restaurant. Definitely! We had such a fun night out with their friends! All of them are lovely people.

The woman whose birthday it was was turning forty five and looks fabulous. Everyone seemed so happy and caring about each other. Many of the conversations were in Spanish, but Sarah kindly translated for me. And if I was part of the conversation they would speak English, with Sarah’s occasion assistance with finding the right word.

I enjoy listening and trying to pick up what I can. We shared a bunch of appetizers mainly comprised of fried cheese and dipping sauces. Needless to say, they were delicious. The birthday cake was, no lie, the best cake I have ever tasted. We stayed out until 1AM and had a fantastic time.I slept like a baby. The next morning we drank coffee and talked more. Javier and Sarah have been dating for almost two years. They are real estate brokers, mainly focusing on helping people find places to rent. And it sounds like they are really good at it! Sarah is from Germany and Javier has lived in Costa Rica his whole life. They are wonderful people and were so kind to welcome me into their home.

After coffee (which was amazing, the coffee here is as good as they say it is), we went to a store called Pequeno Mundo (small world). It had a lot of stuff and fairly inexpensive. The purpose of the trip was so I could get a hammock. They had bought one there that was really nice and only $15. I ended up getting some groceries, cookies from Belgium for my CR family and toothpaste.

We left the store at around 10:45 and started heading for the bus station. They graciously offered to drive me there, which was a good 20-30 minutes out of their way. As we got closer to the station, Javier locked the doors and put the windows up.

It was not a nice area of town. Lots of people sleeping on the street and “junkies” they told me. I saw one man rushing down the sidewalk holding his crouch and then went to the bathroom along the sidewalk on a building. It is difficult and humbling to see people in such poverty. I saw one man eat a piece of fruit he picked up off of the street.

We finally got to the station and Sarah waited in the car (illegally parked with the four ways on) while Javier went in with me to ask where to get a ticket and translate for me. He asked a police officer and then translated to go to the third floor to buy the ticket and then the bus leaves from the main level. He quickly left to get back to the car to avoid a different type of ticket.

I went upstairs where they redirected me to the second level. Eventually I got to the correct window and got the ticket I needed for the Samara bus. I had about 30 minutes before it departed, so went to find a restroom before the long ride. When I got to the bathroom, there was a man outside the door collecting tickets. He directed me to a store front next to him where you bought a ticket for about $1 to use to facility. I was actually really thankful for this. The station did not feel safe and it was well worth a dollar to have him outside “guarding”. The bathroom was surprisingly cleaner than I expected. Afterwards I found the line for the bus and waited until we were allowed to board. I didn’t realize that the seats were assigned and was moved to my correct seat after accidentally taking someone else’s. I shared the seat with a lovely girl, Brenda, who I am going to tell you about in my next post.

QCOSTARICA - No more soup for you! If the Minister of Public Works and Transport (MOPT), Rodolfo Méndez, has his way, the H. Solís...