Trip to San Jose: Part One

QCOSTARICA –  Thursday night I went to the ticket window and bought a bus ticket to San Jose, departing Friday morning at 9. The purpose of the trip was to take my dead MacBook to Icon Apple, an authorized Apple Store, to hopefully get fixed. 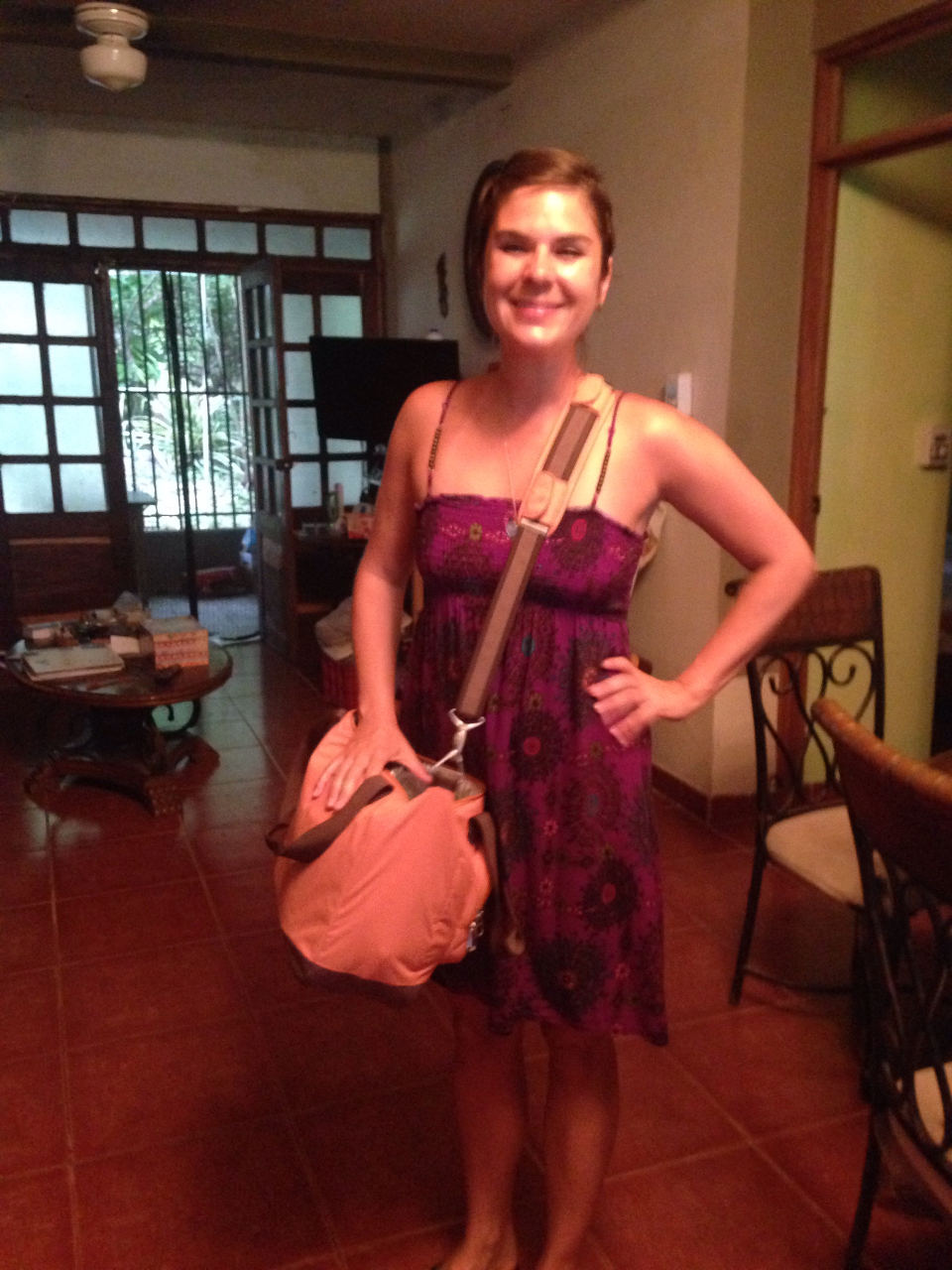 Thursday night Sarah, Miguel, Jack and neighbors Mags and Fraser all walked me through the steps. Take the bus to the last stop at San Jose, then take a red taxi (so it’s a legitimate one, not another color) to the multiplaza at Escazu. The multiplaza is a huge shopping center.

After I go to Apple, I need to find wifi (hopefully at Apple) and message Sarah, the woman who stayed with us over the weekend. I was going to spend the night at her and Javier’s house (who live in Santa Ana, close to the multiplaza) and then head back to Samara Saturday morning.

I packed my day bag the night before and woke up bright and early Friday morning ready to go. No alarm clock needed, only roosters (which I am starting to get used to).

The woman who sold me the ticket said to be at the bus stop by 8:30, so like a good Mennonite with German heritage I showed up 8:15. Needless to say, there was no one there yet. Eventually people started trickling in. The first couple who joined me were singing and playing a drum while they walked. The man had the longest, thickest dreadlocks I had ever seen. Another young American girl who came by taxi looked petrified.

It was fun to sit and watch people going about their morning. One man who was with the Nicoya City came by in a government vehicle cutting overgrown bush down with a machete. Other people passed by, riding bike or walking, getting groceries or on their way to work.

The bus came at 8:55 and we were on the road by 9. It was a really nice bus with contoured seats and air conditioning, a nice surprise! I had only packed my small day bag so kept it with me inside, however most people put luggage underneath.

The scenery along the way was beautiful. Rich green mountains and fields with cattle grazing. Interesting little houses, some nicer than others. Random little stores. We got to Nicoya and some people got on. The bus station was very busy. We were only there for five minutes and took off again.

At some point along the ride, I started talking with Terry, a man who moved to CR from California over 20 years ago. We talked for awhile and I told him where I was going. He said he would show me at the bus terminal where to go. He ended up being a godsend. He was on his way to the San Andres Islands, which are close to Nicaragua but are actually part of Colombia.

I practiced Spanish, read and took pictures. At some point, Ericka sat next to me and helped me with some of the phrases I was writing about what my computer was doing (in case the Apple Store was only Spanish speaking). She was very nice, though our communication was limited. I need to learn Spanish. Another woman came on with a cardboard box full of chicks peeping away. At a few stops, a person would get on and walk down the aisle selling things, candy, bread, coconut water. Then they would get off at the next stop. It is an interesting business plan, low overhead.

At a little town called Esparsa, the bus stops for fifteen minutes. You can go the bathroom and buy food. There is a cafeteria style restaurant and another little store. The bathrooms were interesting.

The men’s side did not have a wall, so you would see them standing there with their back to you. Not a big deal, but fascinating none the less.  All of the sudden everyone was lined up at the bus and we took off again.

Terry said you have to be careful because it is easy to miss it. I can believe it, within three minutes he opened the doors, we loaded and left.

No signals or bells or warnings.

As we got closer to San Jose, we started climbing more and getting to higher elevation. It was gorgeous! Mountains surrounding you with nothing but lush trees and clouds that you were level with.

Occasionally you would see a little house tucked away surrounded by trees on the mountainside. I cannot help but fantasize about what their life is like.

Eventually we arrived at the San Jose bus terminal, which is fairly new according to Terry. The bus I needed to take stopped about six blocks away, not in the terminal. He said we could just walk there. He also said it is not safe to walk alone. I was very thankful he was with me.

It was very busy, people every where and appeared to be a fairly poor area, though I have little to compare it to in San Jose. But compared to cities at home, there were more people begging, trash littered everywhere, just not clean.

We passed probably fifty little shops in our brief walk selling produce or meat or baked goods. I took some pictures but honestly was more focused on not getting anything stolen. I was thankful once we got to the bus and Terry made sure I was on safely. As I mentioned earlier, he was wonderful.

I am not sure how I would have navigated otherwise other than a very costly taxi ride. I  will share more pictures and the rest of the story later.

Typing on the phone is tedious.

QCOSTARICA - On Monday, the Organismo de Investigacion Judicial (OIJ) moved to the raid, seize and arrest of their investigation into corruption of public...
Weather

QCOSTARICA - Characteristic of the rainy season, we will see rain in the afternoons and nights in the Central Valley, the entire Pacific coast,...
Disasters