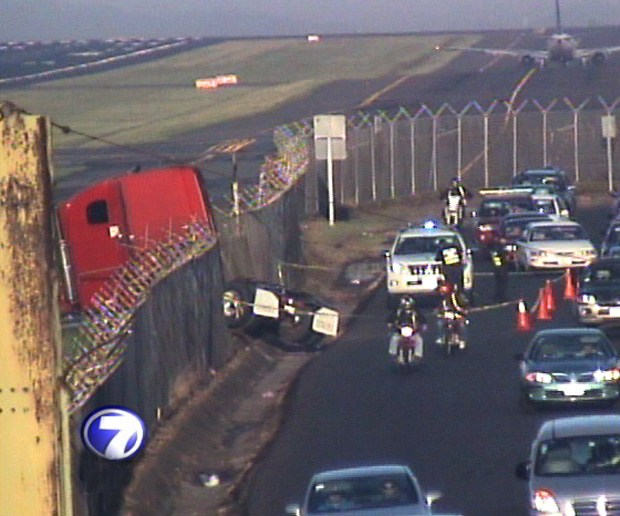 A driver drove his tractor trailer cab right smack into the Juan Santamaria airport fence Sunday night. As of this morning, the truck had yet to be pulled out, leaving a sight for passing drivers.

The driver, a Salvadoran, told traffic police that he lost control of his rig dodging a motorcycle while driving in the Alajuela direction.

This is not the first time for this type of accident and at this particular location.

Immediately west of the traffic lights in the direction of the airport is the intersection coming from the north service road, where traffic is supposed to come to stop before crossing the highway.

At this intersection, many a driver comes to a rolling stop instead of a complete stop, dashing out in front of oncoming traffic. And at times likes last night, the “dashing” driver does not properly calculate the distance and speed of oncoming traffic, resulting in one or both vehicles swerving.

Big trucks, as any experienced driver can tell you, cannot stop on a dime. Add a slick road surface (like last nights rain) and speed (there is not evidence the truck last night was speeding) and you have a recipe for disaster.

Fortunately there were no fatalities in last night’s accident.

That has not been the same in each incident at this intersection.