Much of the world has been appalled by US President Donald Trump's behavior since he was diagnosed with COVID-19. But his supporters love it, writes DW's Ines Pohl from the US state of Ohio. 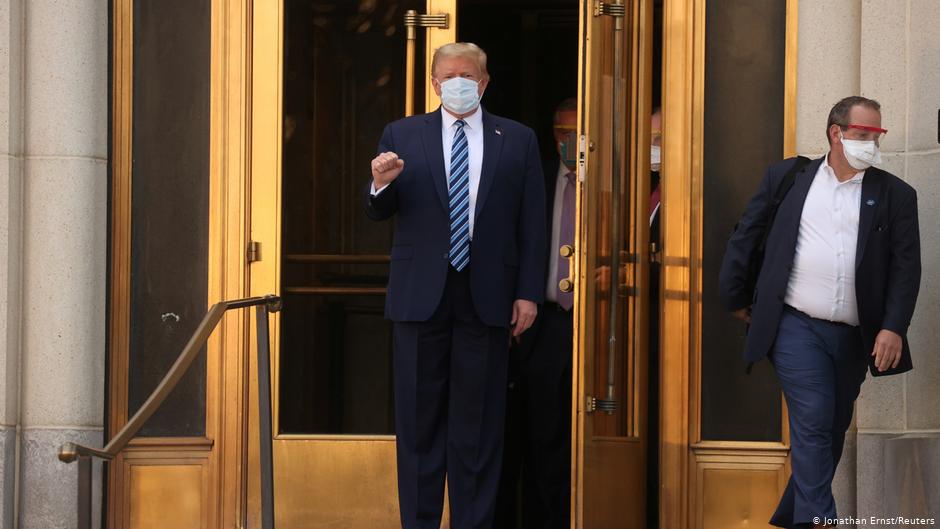 OPINION by DW’s Ines Pohl from the US state of Ohio – “I could stand in the middle of Fifth Avenue and shoot somebody and wouldn’t lose any voters,” Trump boasted notoriously at the beginning of the 2016 election campaign.

The president hasn’t yet shot anyone in New York, but his recent reckless behavior after testing positive for the coronavirus comes pretty close.

After two days in hospital and at a time when he was almost certainly still contagious, he got into the back of his black presidential SUV and put his security staff at risk in order to drive by his fans. Wearing a black mask and an open shirt, he smiled and waved victoriously.

The next day, he returned to the White House and removed his mask triumphantly at the top of the steps leading to the White House balcony as he posed for the cameras. “Don’t be afraid of Covid,” he had tweeted before leaving the hospital. “Don’t let it dominate your life.”

He said that he was “feeling great,” with the underlying suggestion being that the virus was not the potential threat to life that his political rivals depicted it as.

From across the Atlantic, one might think that Trump’s recent behavior alone would be enough to ensure that he does not win the upcoming election. But here on the ground, that is not so obvious.

To understand US voters, one has to remember, among other things, the importance of the president’s role in nominating Supreme Court justices, who have life tenure and can determine the country’s political direction for decades to come. Their influence can be much more powerful and lasting than that of a president, who is in office for a maximum of eight years, two of which at least tend to be spent on the campaign trail.

In addition, some 25% of US voters are opposed to women having the right to an abortion. They do not care what presidents do or say so long as they fight against this right. Although Trump has been known to change course and backtrack often, he has been unwavering when it comes to this issue.

He has also been unwavering with regard to generous tax breaks benefiting the upper-middle classes and the super-rich, who already have plenty — but seem to need more.

A defender of white America

Then there are the many Americans who didn’t really know where they belonged in a country whose current white majority will likely be a minority in less than 25 years’ time. But that was before Trump arrived on the scene as a political outsider and successor to the first Black president in US history.

He has capitalized on racist fears, seeming to stand as a guarantee for the preservation of white America, among other things through his curbs on immigration and an apparent reluctance to condemn white supremacist movements. He also appealed to working-class whites by promising to bring back jobs that had been outsourced to other countries and to restore former industrial hubs to their past glory.

Such supporters were shocked when their superhero caught the virus and seemed to falter. And Trump’s reckless behavior was part of a grand strategy to reassure them that all is well — he needs their unflinching support if he is to have any chance of being reelected. And his tactics have worked.

As for the others — such as Black people whose relatives have died because they did not have access to the same medical treatment as Trump or those who cannot fathom why the president has still not made it mandatory to wear masks nationwide — he simply doesn’t care, because he knows that he cannot win them over.

This might all seem completely crazy from a distance. But it is apparent that Donald Trump’s tactics are working among large swaths of the US public. No matter what happens, as long as he stays healthy enough to keep up his little games, Trump’s supporters will continue to root for him.

What will be decisive in the end is whether Trump’s behavior will motivate enough people to vote him out of the Oval Office, as Joe Biden on his own is not attractive enough to draw undecided Democrats and unwilling voters to the polling stations.

This article was translated from German.