Brazil: Struggling with life after COVID-19

Many people who contracted the coronavirus disease struggle with long-term health issues. Maria Alzenir, a Sao Paulo local, got infected in July but is still dealing with a chronic shortness of breath and muscle pains.

Maria Alzenir Lima was released from hospital one month ago. The 53-year-old Sao Paulo local has officially recovered from her COVID-19 infection, yet still struggles with a persistent cough and shortness of breath. Getting around is a serious challenge. And after all this time, she still needs supplemental oxygen. 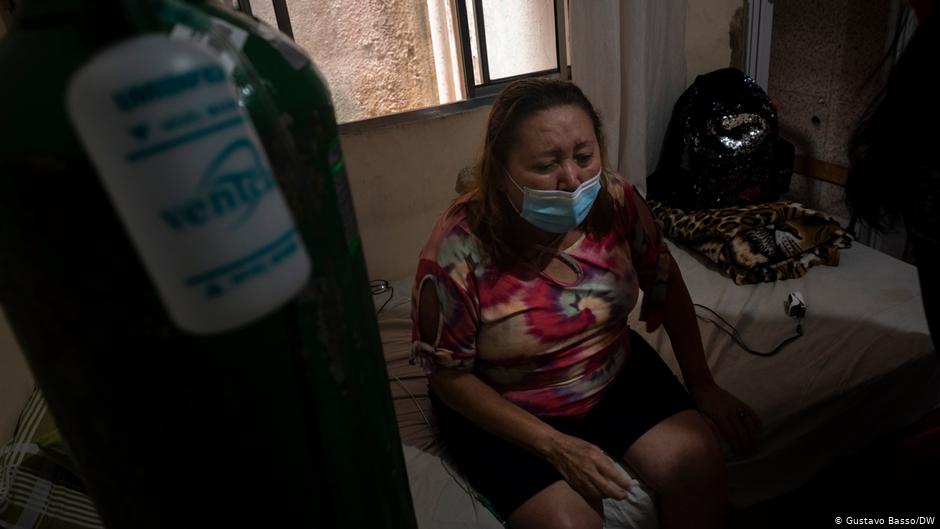 Alzenir — a nurse by training — spent 40 days in hospital. Her husband, who contracted SARS-CoV-2 as well, was hospitalized one day after her. He died on August 4 from heart and kidney complications brought about by the illness.

“I still cannot believe it. When I was hospitalized, my husband was still doing fine,” says Alzenir. “I find it hard to grasp that he will not be at home when I go back.” Alzenir has not yet returned to her own house but has been living with her daughter Barbara Lima since being discharged, as she requires round-the-clock care.

Last week, when the global coronavirus death toll passed 1 million, with 140,000 of those deaths recorded in Brazil alone, Alzenir did her 10th physiotherapy session at her daughter’s home to deal with the consequences of her long hospital stay. Alzenir’s leg muscles have grown weak and walking is difficult for her. She says that immediately after being discharged, she could not even stand upright. Now, at least, she can walk a few steps, she says.

Prolonged hospital stays take their toll on the entire body, says Marli Sartori, an infectious disease specialist at Brasilia’s Santa Lucia hospital. “COVID-19 patients in intensive care usually need three to four weeks until they can be discharged,” she says, adding that additional therapy is then needed for a full recovery.

Alzenir’s relatives pay the equivalent of €12 (US$14) each week so she can take private therapy sessions. Brazil’s publicly funded health care system, known as SUS, does not cover such expenses. Costs for Alzenir’s care will rise even further, as she will have to see a lung specialist.

For now, however, her relatives do not want to risk taking her outside. “I was concerned from the very beginning — but now that I have lost my father and almost my mother, I am even more careful,” says her daughter. “She can cope without supplemental oxygen but what if she starts feeling unwell when we are outside?”

Alzenir still cannot eat proper food, as swallowing gives her pain. She is also dealing with a persistent cough. But her physiotherapist Evelyn Felisari says this is not a sign that the illness is recurring, but results from the two weeks she spent on a respirator, as the device irritates the larynx receptors. She says Alzenir’s lung has also been strained, along with her diaphragm. “The goal is to get patients back in shape within a month, though this always varies depending on the person.”

A study by South Korea’s Disease Control and Prevention Agency found that nine out of 10 COVID-19 patients suffer from long-term issues like fatigue or a loss of smell and taste after recovering from the illness. Some 26% of those who participated in the study reported suffering from chronic fatigue, making it the most common long-term symptom. Nature, a weekly science journal, cites a further study revealing neurological damage caused by the virus. And according to a Japanese study, COVID-19 may also damage brain tissue.

Some 300 studies have been devoted to investigating the potential long-term health implications of COVID-19. Among the most severe suspected consequences is aphasia — the inability to comprehend or formulate language due to damage caused to certain brain regions — along with strokes and seizures.

Germany’s public health agency, the Robert Koch Institute (RKI), cautions that it is still too early to make reliable statements regarding the pathogen’s long-term effects and whether it causes irreversible damage. Even so, if what many studies suggest is right, thousands, or even tens of thousands of former COVID-19 sufferers will end up struggling with ongoing health issues, perhaps for the rest of their lives. The initial belief that SARS-CoV-2 only damages people’s respiratory tracts has been abandoned. Germany’s RKI warns on its website that the virus can cause damage in a variety of ways, affecting lungs, kidneys, the liver and heart.

And that may not be all. Maria Alzenir appears to suffer from short-term memory loss. “Yesterday, she asked me why one of our relatives has not visited us — even though he came by just yesterday,” recalls her daughter Barbara. Since contracting the virus, Alzenir also suffers from insomnia, a problem she did not have before.

Maria Alzenir and her relatives live in Sao Paulo’s Sapopemba district, which has a population of some 300,000. It has seen some of the country’s highest coronavirus infection and mortality rates. Over 520 deaths were recorded here until early August alone, including that of Alzenir’s husband, Jose Wellington de Sousa.

Alzenir says her late husband, who was 69, implored her to stop working amid the pandemic. He had told her they could scrape by on his pension. “But I did not want that, so every day, I took the overcrowded bus to work,” says Alzenir. Now, in hindsight, she wishes he had listened to him.

After weeks of constantly high infection rates, Sao Paulo state is seeing a gradual flattening of the curve. Even so, the region is not out of the woods. According to Dados Transparentes – a Brazilian public health website — Sao Paulo state recorded some 32,000 new infections and 1,070 deaths in the last seven days. Indeed, while social distancing measures caused the infection curve to sink again in many countries, Brazil has seen infection rates remain at a consistently high level, and the country has now recorded almost 5 million confirmed cases and 146,00 deaths.

Despite these grim figures, many Brazilians have been flocking to the country’s beaches and bars to socialize and party after lockdown restrictions were lifted. Maria Alzenirs’s daughter-in-law Tamires is deeply concerned by this recklessness. “Although many people in our street are infected, some of them keep partying,” she says.

But Alzenir herself can empathize with their need to relax and enjoy life. After all these months, she, too, would love to head out for a cold beer, she says.

QCOSTARICA - Wednesday morning was a quiet morning in...
Coronavirus